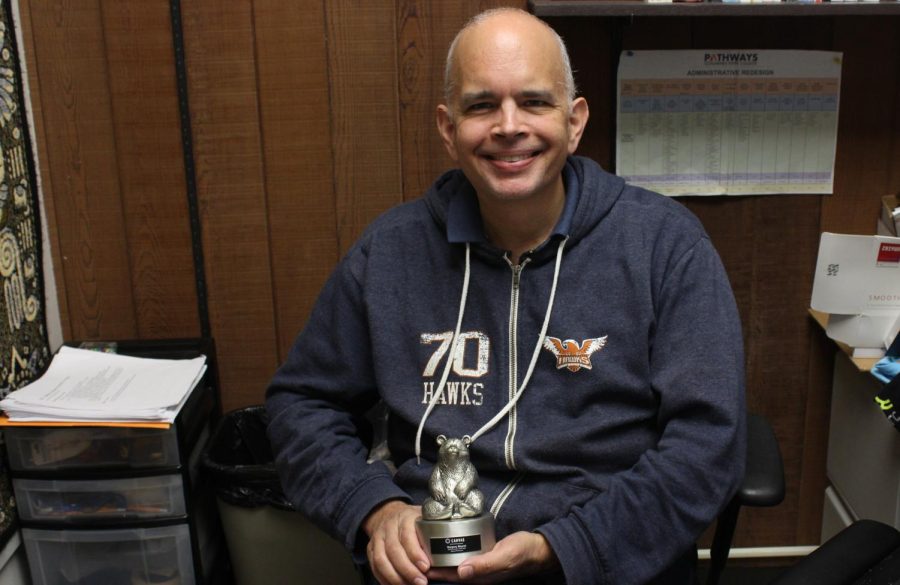 Gregory Beyrer discusses his role as Long Distance Coordinator. He was awarded Educator of the Year from Instructure over the summer.

The Distance Education Coordinator on campus was one of the six national winners to receive the Educator of the Year Award.

Gregory Beyrer, who coordinates long-distance learning for students, received the award in July from Instructure, the company that created Canvas.

Distance Education can also be known as long-distance learning for students enrolled but choose to take their classes online.

Canvas is an academic communication device for students, professors and faculty. In addition, students can use Canvas to keep track of assignments, grades and incoming or outgoing messages from other students or faculty.

“The main benefit is the expansion of access for students who have the desire to attend college but have a hard time attending in-person classes,” said Beyrer. “There is also a benefit for instructors, as the online mode gives us ample scope for innovation. For me, it is a lot of fun to find solutions to the challenges of helping students achieve class outcomes in this mode.”

Beyrer has been teaching online classes for 17 years and using websites to support in-person classes for 22 years, after teaching on-campus courses for seven years.

Beyrer said that Melissa Loble, senior vice president of customer success and partnerships at Instructure, was the person who presented the award to him. The award was presented during a keynote presentation at InstuctureCon in Long Beach.

Ken Cooper, a District Office IT Analyst and coordinator for Canvas, nominated Beyrer for the award. Cooper said he has worked with Beyrer for four and a half years.

Last spring Cooper co-taught a course with Beyrer through “@ONE,” focusing on online practices involving other faculty coordinators and training in regards to how to use Canvas.

“The aspect of his approach that sets him apart from many others is that he consistently strives to better teach, interact and inform everyone through cutting-edge technologies and methods,” said Cooper in his nomination letter.

Biology Professor Jena Trench said she has been working with Beyrer for 10 years. The first committee she served on was Distance Education Instructional Technology during her second year on campus.

“At first I was just attending meetings, but since then, we’ve started to work more and more together,” said Trench. “I took workshops from him and he helped me learn how to teach online.”

Trench said that outside of education, people generally tend to move from company to company and different roles or positions.

However, Trench said faculty in academic institutions tend to stay within their role and get into a continuity, which helps build significant relationships among their fellow colleagues.

As Beyrer has continued to be the coordinator for distance education on campus, he has been able to train and work with faculty who may be new to using Canvas.

“Hundreds of nominations were received from Canvas-using colleges around the world, so the award is quite an honor,” said Beyrer. “While it is nice to be recognized for my hard work, I also feel gratitude for the opportunity I have at CRC to do work worthy of recognition.”