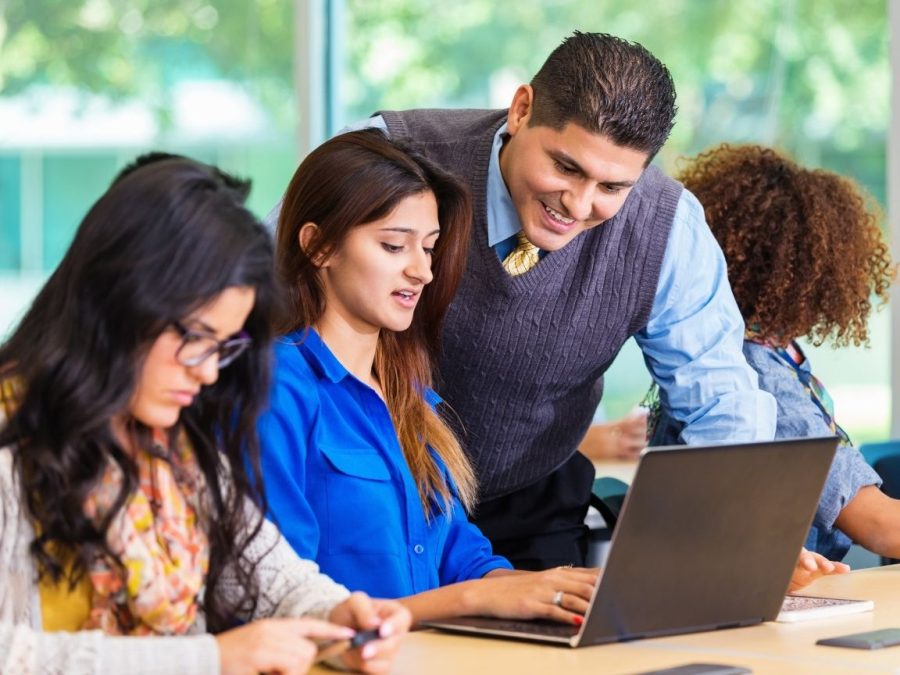 A professor and a student looking at a laptop. Student and professor relationships can be linked to student success and happiness.

The relationships students form with their professors can prove to benefit them academically and personally.

Students who said a professor cared about them were twice as likely to be engaged in their career and 1.7 times more likely to be flourishing in their wellbeing, according to a 2018 Gallup study.

English Professor Kelsey Ford said cultivating long lasting bonds with students is the reason why she does what she does.

“It gives me the ‘why, why do I do this,’ right? It’s because I’m investing in students’ lives, I’m investing in their education, I care about what happens to them. So when I get to see some of those results later on, it’s just amazing,” Ford said.

Ford said she keeps a log of the students she’s interacted with to ensure she’s connecting with all of them.

“One thing I do for myself is I keep a list of student names and I try to write down any time I email them or reach out to them in whatever way or if they come to office hours so I know who I am connecting with and how regularly,” Ford said.

Environmental science major Madison Ledbetter, 20, said her agriculture computer professor has been referring the class to volunteer opportunities and events that correlate with their major, which she finds helpful.

“I really connected with my art history professor. I liked how she set up her class even though it’s online and I really enjoyed actually listening to her lectures,” Ledbetter said. “So I think it’s more about how the professors set up the class. It seems like they want to be there.”

Ledbetter said reaching out to students who are struggling with a C or below, meeting with them individually, identifying why they are struggling and offering to support them are ways professors can connect with students and signal that they care about a student’s overall well being.

“I’ve only had one professor do that. And that was because she saw that I missed a couple lectures, and she reached out and she was actually about to drop me, but then I told her what was going on,” Ledbetter said. “And she understood and I caught up on all the notes and everything.”

Ford said she reaches out to students who are not engaging with the material or seem to be falling off course.

“And sometimes I get no answer, and that’s fine. I don’t know what’s happening. Honestly, I tend to be pretty empathetic so I start worrying,” Ford said. “I hope that they understand that because I’m expressing concern it’s not because I’m trying to come down on them, I really am concerned.”

Ford said when students do get back to her she suggests a meeting via Zoom or phone to strategize a plan together on how to catch up on late work and stay on course for the remainder of the semester.

“I have them really tell me what’s going on in their lives so we can come up with a plan that’s actually going to work, so that it’s really the two of us coming up with a plan and not just me telling them what I think should happen,” Ford said.

Geography Professor Jillian Jackson said student-professor relationships are crucial for the professor to understand what the student needs in the classroom.

“Through relationships I’ve been able to connect students to professional opportunities, for job interviews, things like that,” Jackson said.

Jackson has also supported students with some of the more personal issues they’re dealing with.

“But then also for meeting basic life needs, I’ve had students experiencing homelessness, students who are involved in things like domestic violence,” Jackson said. “Sometimes professors are some of the only people that students will get to see, and we can really be a bridge to resources that students need.”

For students wanting to build long-lasting relationships, Jackson recommends students shoot their professor an email even after completing the course.

“I’ve also had students email me things that they’ve run into, like articles or experiences that they’ve had that remind them about the class or somehow connect to the class,” Jackson said.

She said she’s still in contact with some of her students from her first year of teaching.

“It’s been really fun to watch their progress through their academic career,” Jackson said.

Eighteen-year-old nutrition major Anh Ngo said professors who are passionate about their subject matter and are willing to share stories about themselves build a bond with students that keeps the class engaged.

Emma Daniels, 18, an undeclared major, said she is in a sociology class where the professor is willing to deviate from the structured lesson plan to allow the students to engage in deeper debates.

“We go into a lot of deep, and kind of intense subject matter. People are a lot more comfortable talking. And he just tries to relate to us a lot,” Daniels said. “If everyone’s really engaged one day he will be like, ‘OK, let’s just drop the lesson, and just talk about this and stay focused on what everyone’s feeling right now.’”

Daniels said she appreciates it when professors post links to CRC resources on their Canvas page, specifically crisis hotline information, indicating that they care about the student’s overall well-being.

Ford said she’s connected with students on social media and created more long-lasting relationships with them.

She recounted one of the more memorable relationships she’s built with one of her students.

“I had a student who was returning to college after many years and she had some grown children, and she still had some children at home,” Ford said. “And she was very intimidated by technology, this was an in-person class. I had the students do a quiz [online] before they came to class just to check-in.”

Ford said the student had very limited computer skills and did not know how to use the online platform. The student came to her office in tears.

“I felt really terrible because I had created this situation by putting these quizzes on the computer,” Ford said. “She said ‘I don’t know how to do this, maybe I should drop out of college, I shouldn’t be here.’ And so we had a long conversation and I told her about my mother, who returned to college when I was 16.”

Ford said she reminded her that by attending college despite the difficulties in her path she’s inspiring her children.

Ford said she showed the student how to take the online quiz and how to navigate Blackboard, the online teaching platform at that time. The student completed the course and even transferred to a four-year university.

Ford said the student was at some point nearly homeless and reached out to her to write a letter in support of her for transitional housing.

The student now works as a teacher. Ford said they follow each other on social media and keep up to date with each other’s lives.

“I adore that relationship and it’s been good for both of us,” Ford said.

Ford said she understands students might be struggling with more personal issues and tries to provide support.

“Because I think we are the students’ first contact really. I mean you may come into contact with people in counseling or admissions on a very limited basis,” Ford said. “So, if students are going to feel comfortable sharing something it’s probably going to be with one of us first.”