Opinion: Judging based on behavior not all bad 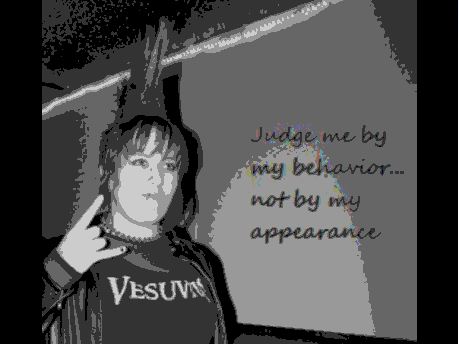 Many Americans still judge people by the color of their skin and furthermore, people judge others based on what they wear.

America’s founding fathers said, “All men are created equal.” They really should have written white men, since they were the only ones free at the time.

Fortunately, most American citizens have come a long way in the last 236 years. Unfortunately, not all of the good old U.S.A. shares the opinion that everyone is created equally.

While attending a metal concert recently, my friend commented on how the many black-clad, pierced, tattooed kids with multi-colored mohawks were “surprisingly normal.” Her mind was blown, and the stereotype she developed over years of media input shifted into a positive light. Suddenly, the hardcore people weren’t scary anymore.

Her opinion was altered because these kids behaved differently than the people she thought of as hoodlums.

Why she thought tats and mohawks meant hoodlum, I don’t know. Perhaps she saw an old Clash video with slam dancing and wild behavior on MTV one time and was traumatized. She certainly stereotyped them.

Stereotypes and prejudices start in our childhood. The opinions and beliefs of our parents affect us the most. Then there are traumatic events witnessed or personally experienced, possibly followed by years of therapy.

The media has always been a factor in forming our opinions since the advent of pen and paper.

For instance, as an American, when someone mentions a terrorist, who is the first person you think of? Prior to 9/11, my first thoughts of a terrorist were the guerrillas on the jungle island who wore camouflaged outfits and carried big guns in the movie “Captain Ron.” Now Osama bin Laden and people who look like him pop into my head.

It’s embarrassing to admit, and my rational mind knows that not every person with a scruffy beard and a turban like bin Laden is a terrorist, but it can’t be helped.

The horrendous attacks on 9/11, and the subsequent events of hunting down the perpetrators, pasted their faces in our minds and put bin Laden’s name in everyone’s vocabulary.

People became paranoid, and all our lives were affected by the behaviors of evil men led by one of the biggest monsters in history.

Most recently, the media and black community leaders, like Jessie Jackson, have demanded satisfaction in the shooting death of 17-year-old Trayvon Martin.

The color of his skin or what he wore may have, unfortunately, been contributing factors in the tragedy. The other factor, his behavior towards the man who shot him, we can only speculate. Whether he acted aggressively or passively, we may never know.

The color of a person’s skin should not be a factor, nor should a people be judged by what they wear.

However, the way a person behaves, good or bad, often brings judgment to not only themselves, but to their family, their community, their religious organization and perhaps anyone who looks like them or has the same name.

It’s human nature to make judgments based on our own experiences and what we see. It’s wrong to behave in a way that will hurt other humans.

Unfortunately, every race has barbarians.