The U.S. was founded on principles of theft through the genocide of its natives and the stolen labor of African slaves, but its citizens stand on pledges of freedom, liberty and justice for all who choose to settle on its soil. Depending on the skin color of whom you ask, those promises have been maintained. 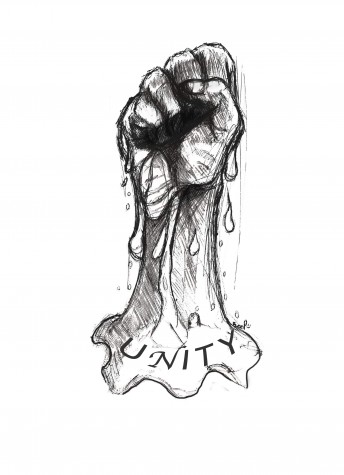 However, we still have a long way to go.

Though no comparisons can or should appropriately be made to slavery, the U.S. has continued a long-lasting trend of undervaluing black lives.

Failure to address this trend directly, as it’s been systematically swept under the rug, has left black America in a state of turmoil with hopes that maybe one day, black lives might actually matter.

Nearly 76 percent of African Americans, compared to 33 percent of whites, report that there is a problem with the justice system when it comes to law enforcement and race, according to a McClatchy-Marist Poll on public perception of police.

Established after George Zimmerman was acquitted for the unjust murder of 17-year-old Trayvon Martin, the “Black Lives Matter” liberation movement has boldly taken action to address what now seem like age-old issues concerning police brutality and anti-black racism, according to Black Lives Matter.

By leading protests, rallies, marches and what some have interpreted as riots, the group’s intent is to shine light on dark issues in a world where “black lives are systematically and intentionally targeted for demise,” according to BLM.

According to a year-long study in 2015 by the Washington Post, “although black men make up only 6 percent of the U.S. population, they account for 40 percent of the unarmed men shot to death by police this year.” Of those who actually appeared to be armed and dangerous, the majority were white.

The overall message to empower black lives and to repress America’s racist underbelly has been misinterpreted.

BLM has been compared to hate groups like the Ku Klux Klan.

Bill O’Reilly claimed that because the BLM movement didn’t reject views of some of its protesters who held up picket signs and said words that were perceived as threats to police, they are in the same category as the KKK, according to a O’Reilly Factor broadcast. “It’s like the Ku Klux Klan. Are the KKK going to hang blacks? No,” said O’Reilly. “But they’re all in the same soup bowl.”

The KKK was built on an ideology of white supremacy, or white superiority, over anyone who is not white.

The KKK was founded in response to the “south’s defeat in the Civil War,” and “as a secret vigilante group, the Klan targeted black freedmen and their allies; it sought to restore white supremacy by threats and violence, including beatings, lynchings, and murder,” according the National Park Service, a history-preserving bureau of the U.S. Department of Interior.

As a pro-black movement BLM views do not equate, at the opposite end, to the pro-white views of the KKK, because the KKK’s views are backed by factors that focus on keeping segregated statuses instead of seeking equality.

BLM only exists because, well, black lives haven’t seemed to matter much statistically.

If the gap in marginalization between minorities and whites was reduced, and black lives in the U.S. weren’t some of the most in need of saving, we’d possibly see an end to the argument.

To be fair, all lives do matter, but allow us to focus on those most in need now.

Maybe arguments like these are blatantly interrupted because their attempts at raising awareness are ineffective, diminishing the cause.

Many tend to act on hate first and ask questions later.

Violence erupted at a KKK rally late February in Anaheim after several protesters had shown up to confront the group. The melee lasted just minutes but ended with three stabbed and 13 others arrested, according to the Los Angeles Times.

Bloodshed is not the answer.

As an incredibly socially-aware generation today, we have an advantage.

Perhaps our awareness is due to our wide access to information, conducted by the swiping of our fingertips on our smartphones, or our increased exposure to other cultures as the U.S. continues to diversify.

Whatever the case, now seems to be the most effective time to use our platforms in order spark difficult conversations regarding the social inequalities we are most held back by, so that we may find a common peace.

Many people are sick and tired of hearing about racism and may disregard its existence. For those living through it, the daily inconveniences it provides are impossible to ignore.

Humanizing a group of people who have been relentlessly dehumanized throughout history needs to be a cohesive effort.

The best thing we can all do now is just listen. Listen to shouts of the oppressed and only then will we hear what fuels them: pain, restlessness and the drive to fix an unfair system in which a climate of racial injustice remains alive and well. We are all matter.