Without funding, how will the Earth survive? 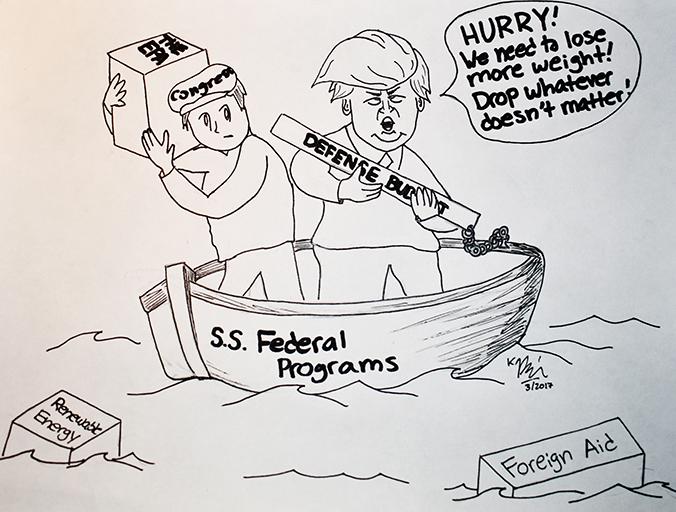 It is impossible to ignore the impact that we as humans have on our environment, whether that be obvious, like city expansion or construction of oil rigs, or invisible (and, some would argue, nonexistent), like greenhouse gases and carbon monoxide emissions that we produce day to day.

And with this impossible ability to ignore the effects of our nature, we must also take the time to understand why after generations of ignoring our ecological imprint, it is important to consider the way the world works, breathes, and continues to grow.

However, there are many people who do not see an issue with a lack of environmental compassion, such as the 45th President of the United States Donald J. Trump.

While still running as a candidate, Trump proposed that he wanted to cut the Environmental Protection Agency “in almost every form,” according to a Washington Post article on March 1. And with his most recent blueprint of America’s national budgets, we see this is coming true.

Due to tremendous cuts proposed by President Trump, the EPA could lose 25 percent of its budget, and according to National Geographic, “as well as a 20-percent reduction of the agency’s workforce” will be removed.

So what does decreased funding for the EPA mean? According to The Independent, programs within the EPA such as protecting tribal land from pollution or funding for clean drinking water will be cut by 30 percent. Additionally, there will be a 70 percent cut to protection programs combating greenhouse gas emissions.

Funding cuts are usually due to redirecting money into other programs that are deemed more important. In our current affair, there is one main program that will be receiving the largest increase: defense.

It is proposed that the U.S.’s defense budget will have a funding boost of $54 billion, an increase laid on the backs of over 30 different environment-sustaining programs that help regulate the air, drinking water, animal habitats and so much more.

According to an article by Fox News published on Sunday, even with the amount of cuts and changes that have already been proposed, a large remainder of Trump’s plan for the rest of the budget still won’t be released until May.

Having the mindset that America needs to continue to build its defense indefinitely, as if we aren’t already the leading world power, is beyond ridiculous. At what point is too much going to be taken too far and the programs that we need to sustain our country will be gone?

We can not let an environmental catastrophe take place; the world has become ours to control, but we mustn’t only use it, we must also care for it before it’s too late to turn back.