Peaceful protests will bring change for us 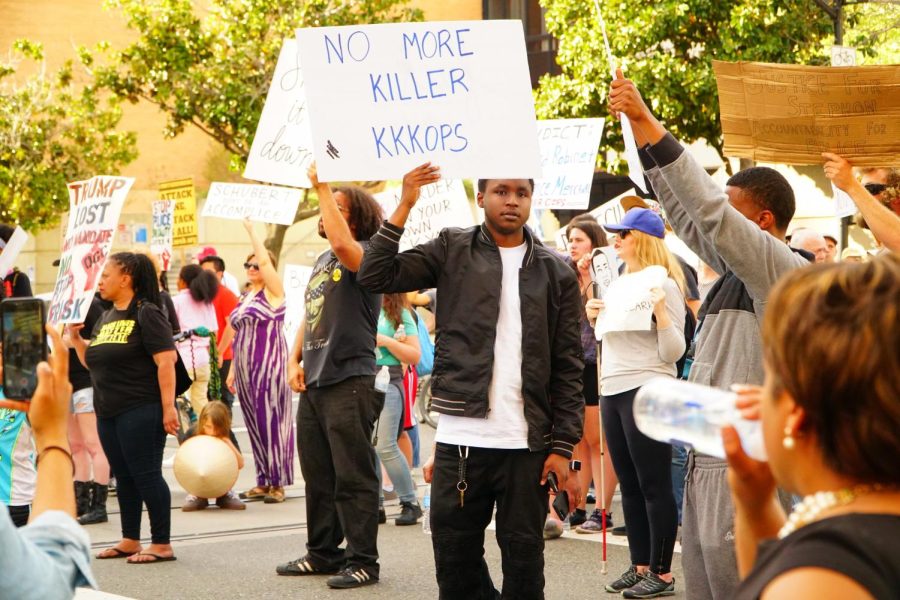 Protestors out in the streets at the Stephon Clark protest on March 22 in Downtown Sacramento.

After the death of a 22-year-old black man from South Sacramento  Stephon Clark who was killed by police March 18, the protests that have occurred in Sacramento have gotten nationwide attention, and all eyes are on the protestors.

After so many deaths of unarmed black men, it is time for change.

There’s a right way to go about things and there’s a wrong way.

On March 22, protesters shut down I-5 and blocked entrance to a Kings game in peaceful protest.

With the attention that the protests have received, lawmakers have begun to take steps towards real change.

California is now working on a proposal to limit when an officer is allowed to shoot, according to a report by ABC News.

Utilizing the attention that’s being received and working with lawmakers and politicians is the only way to make any change.

Stephon Clark’s brother, Stevante,  disrupted a Sacramento City Council meeting on March 28 where he ran down the aisle and leaped onto the council dais.

Stevante Clark danced, yelled and repeatedly told Mayor Darrell Steinberg to shut up. That meeting was stopped due to interest in safety.

Clark’s actions caused more bad than good. All they did was take away a time for voices of the community to be heard by the mayor and the city council.

If we really want progress, we need to begin with changing laws that allow police to shoot when they say they feel like they’re in danger.

There have been over the past three years 15 high-profile cases in which black people were killed by the police, according to a report by The New York Times on Dec. 7. That same report states that only one officer faces prison time.

As of now, the law states that police can shoot if they feel like they’re in danger and have reasonable fear, so a conviction is a rare thing according to report by ABC News.

If California can change that language from reasonable force to necessary force, then maybe real change will happen. If changing the language of the law can lead to convictions, then cops won’t be so quick to draw their guns.

There’s a likelihood that law enforcement won’t like this change, but a change in the way the laws are written must is a step in the right direction to stopping the deaths of unarmed black men by law enforcement.

People must continue to let their voices be heard and protest correctly. They don’t need to cause any damage to any property or harm anyone.

People need to go to city council meetings– not with the intention to disrupt — but to speak and to have everyone’s voice be heard.

If California can make this change, it could be the beginning of the change in the nation.

This is a national issue. If this law does pass, people shouldn’t stop there. They must continue to fight for each other and for the people who can’t speak today.

Lawmakers are taking a step in the right direction but the fight must continue so that no one can abuse the power that was given to them.