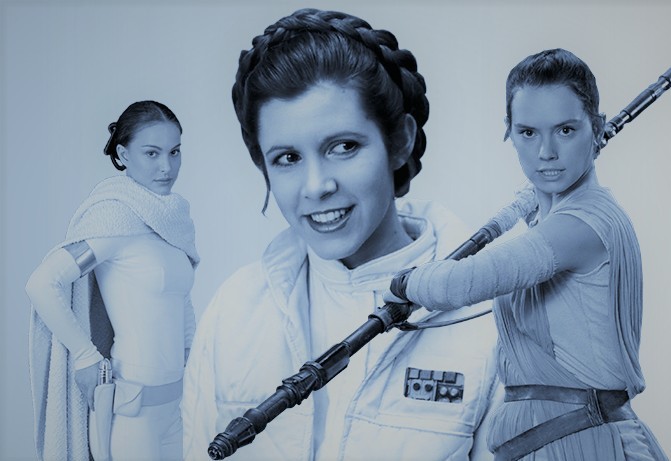 From left to right: Natalie Portman, Carrie Fisher and Daisy Ridley all played leading roles in the "Star Wars" series. However, not all fans of the franchise are happy that women are in the series at all.

While “Star Wars” is one of the most famous and successful franchises ever, most of the series’ characters are male. There is a part of the “Star Wars” fan base who believes that Disney, who owns Lucasfilm, is ruining the franchise because there are too many women in their opinion.

Disney purchased Lucasfilm in 2012 and the first new movie they produced was a continuation of the original “Star Wars” storyline. This time, the movie featured a woman as the main character and focused on a new generation of characters.

This is when the backlash for Disney started. People were not happy that a woman was the main character or that women were giving orders to men.

Some people directed their hatred at Daisy Ridley and Kelly Marie Tran, who played Rey and Rose Tico respectively in the new movies. The backlash Ridley received drove her off of social media.

While the original trilogy had the iconic Princess Leia Organa, the story itself focused more on Luke Skywalker. The prequel trilogy had Queen Padme Amidala, and those movies focused on Anakin Skywalker becoming evil.

Some will say that these women were the main characters and that there are more women characters than just those two, but the problem is that these characters are often sidelined. In the case of Padme, she had to die so that Anakin could become Darth Vader.

After the end of the prequel trilogy and before Disney bought Lucasfilm, the franchise focused more on television with their “Star Wars: The Clone Wars” animated show, where the character of Ahsoka Tano was introduced to audiences and became a fan favorite. Her character opened the door for more female characters, and while she has a larger role in the story, she is also sidelined to focus more on Anakin or other male characters.

After Disney purchased Lucasfilm, they produced the new “Star Wars” animated television series “Star Wars: Rebels,” where two new female characters were introduced that had their own journeys. It expanded Ahsoka’s story and made her more of her own character.

Despite the backlash Disney and their actors received after “Star Wars: The Force Awakens,” they did not stop putting more women on screen. The first spin-off movie “Rogue One: A Star Wars Story” had a woman as the main character.

Still, Disney did not stop the addition of more women. The upcoming “Star Wars: The Rise of Skywalker” will have two new female characters. The newly launched streaming service Disney+ has the live-action television show “The Mandalorian” set within the “Star Wars” universe that will introduce a new female character to fans.

The addition of more women on screen is important, but it is also important to note that “Star Wars” is also adding more women behind the screen as well. Deborah Chow (“Jessica Jones”) was the first woman to direct any project connected to “Star Wars” with “The Mandalorian.”

This show will have two women directing episodes. Disney is also producing a new live-action “Star Wars” television show for Disney+ and all of its episodes will be directed by a woman.

These new additions are why Disney has improved on the franchise rather than ruining it.