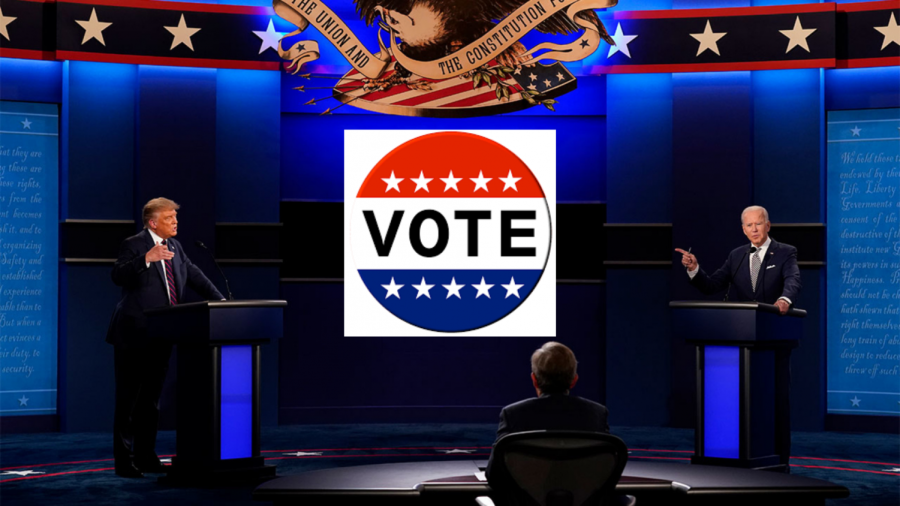 After the first 2020 presidential debate on Tuesday, millions of voters were left unimpacted and uninformed. With only a month remaining until Election Day, it is crucial that voters educate themselves and cast their vote on Nov. 3!

The debate was moderated by Fox News’ Chris Wallace and despite his best efforts, the debate was full of name-calling, interruptions, disinformation and not a lot of presidential policy.

When presented with questions regarding the economy, race and COVID-19, the candidates said nothing about their plans on how to deal with these issues; instead, they argued about what the other did or did not do. It had the appearance of a sporting event, where instead of fighting for our country, they were fighting for their own morale.

It is not unimportant to have a discussion on someone’s track record when it comes to the proposed policy. But what we saw on Tuesday was far from a discussion, rather accusations being thrown by two men we have to decide between.

The debate fell short of inspiring much confidence in either participant’s ability.  While the candidates did not seem willing to go into detail on the policies they hope to implement in the next four years, this information still matters.

Those who watched the debate, and even those who didn’t, should ignore the misstep of our candidates and use their resources to educate themselves on what the potential outcomes of each candidate will be. While the display shown on Tuesday may have seemed farcical, it should not undercut just how important this coming election is to millions of Americans.

The extraordinary events of this year are unmatched; the country is starting a new decade in a pandemic and at the dawn of another civil rights movement. Issues like these are the kinds that test democracy.

During the 2016 Election, only about 61.4% of the population at voting age reported participating in that year’s election, according to the U.S. Census Bureau. This number would indicate roughly a third of the eligible voting population did not take place in our last election.

California had its highest midterm election turnout since 1984 during the 2018 midterms at 64.54%. That number needs to skyrocket in 2020.

To call the time in between then and now polarizing would be a massive understatement, and those who went without voting during the time may likely regret it for a variety of reasons. But that regret is also what makes it so important for those same people, and those new voters, to make their voice heard during this election.

When you vote, don’t choose whoever is better at throwing around buzzwords, select the person you believe truly has the country’s best interests in mind.

Your vote does make a difference, even if you think it seems meaningless. The ballot you cast can help to build the foundations of a greater country over the next four years and more.

Remember, voting is a right that not everyone at one point in history had. Many voices were silenced due to factors which they could not control. Honor those before you and take advantage of your right. Have your voice heard during this election.

Listen to the debates. Educate yourself. Learn about the candidates. Learn about the propositions. Now is not the time to sit by and allow these pivotal moments to be handled without due diligence. Remember that this democracy is built to change by the power of its citizens, not its nationally televised entertainment, and come November: Vote!