Staying informed as a first-time voter 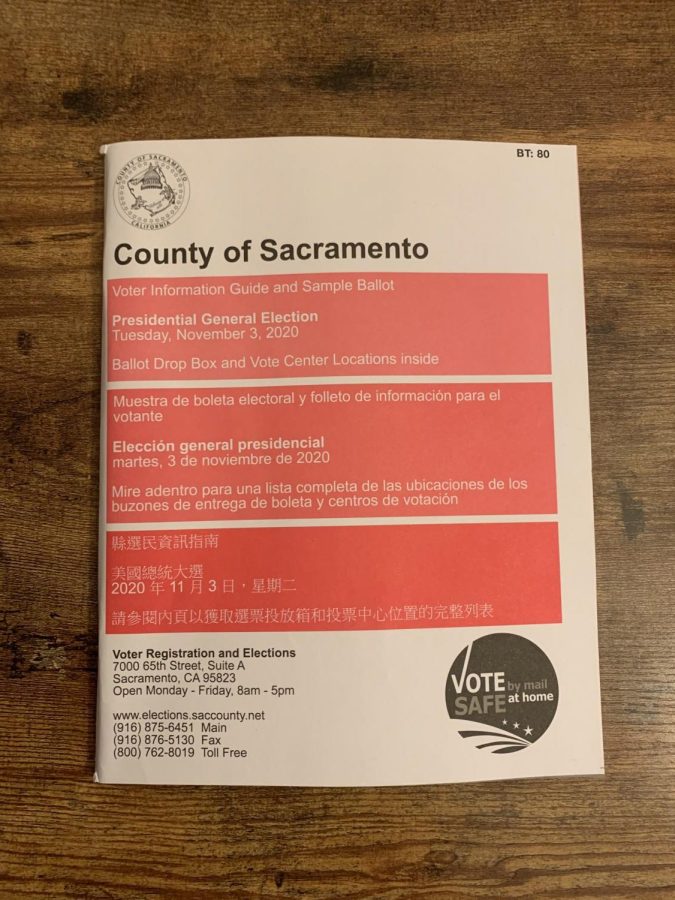 The County of Sacramento Voter Information Guide. Election day is less than a week away.

Voting for the first time can be a stressful and confusing process.
With the Nov. 3 election approaching quickly, many first-time voters are left clueless and deciding whether to mark yes or no on their ballots.
For first-time voters like us, it was difficult to understand the ballot completely as the wording of the proposed propositions can be vague and misleading.
This wording of propositions can be deceptive for voters who aren’t familiar with these proposals.
Furthermore, some of the information can be arguably seen as biased due to its lack of detail.
On the other hand, Proposition 19 presents itself as more confusing because, on this year’s ballot, it’s headlined as, “Changes certain property tax rules, legislative constitutional amendment.”
This headline is attention-grabbing because of the way in which it’s written. Although, it does not explain the significance behind why anyone over the age of 55, or anyone who meets the requirements, should receive a property tax cut.
To get more context on the propositions, we recommend seeking out sources such as CalMatters or other associations.
For example, the California Association of Realtors, California Professional Firefighters, the California Democratic Party, and the California Nurses Association are in favor of passing Proposition 19.
Whereas the naysayers include the Howard Jarvis Taxpayers Association and state Sen. Patricia Bates (R-Laguna Niguel).
From this, you can take a look into why people on each end of the political spectrum choose to agree or disagree with this proposition, which can then allow voters to form their own opinions.
Using tools such as CalMatters and Ballotpedia helped us, as first-time voters, to figure out who supports which propositions and who’s against them.
CalMatters incorporates all 12 of the propositions that appear on the ballot.
Each proposition is explained in an article composed of four separate parts: What would the proposition do? Why am I voting on this? What supporters and opponents say, and who’s for it as well as who’s against it.
Along with this, all of the propositions are explained with a video to accompany the explanations.
There’s also a quiz to take, if one chooses to, to make it easier for a voter to figure out whether or not they agree or disagree with a proposition.
This can become helpful because it allows a voter to pretty much unofficially vote online, figure out what their decisions are on the propositions and then actually fill out their ballot.
We watched the short videos CalMatters provides to give a visual explanation of what’s in the article.
It doesn’t merely have to be videos from CalMatters, you can also watch videos that are informative for voters on YouTube as well.
Some voters may also be unaware of all the candidates on the ballot.
Oftentimes, first-time voters are only aware of the two major-party candidates that are on the ballot and aren’t familiar with third party candidates due to the lack of media coverage.
The Green Party’s nominee for the 2020 presidential election is Howie Hawkins, while the Libertarian Party is represented by Jo Jorgensen.
While Hawkins appears on the ballot for 48 out of 50 states, including California, there are only three candidates that are listed on the ballot for all 50 states. Those being Joseph Biden, Donald Trump and Jorgensen.
Although Jorgensen is listed on all ballots throughout the United States, she is overlooked by media outlets and leaves many to question who she is when first reading their ballot.
We were also unaware of some of the candidates on my ballot and did further research on each and everyone’s policies and beliefs.
By doing outside research, it makes the decision a lot easier when trying to choose the right candidate to run this country and who aligns with your beliefs.
Voting can be confusing and intimidating when looking at your ballot for the first time but do outside research, stay updated on the news and vote.
Being a voter is important, but being an informed voter is empowering.
As first-time voters, we are excited to take part in our first election and vote for our next president.