Ariana Grande glows in ‘Positions’ but doesn’t push the envelope 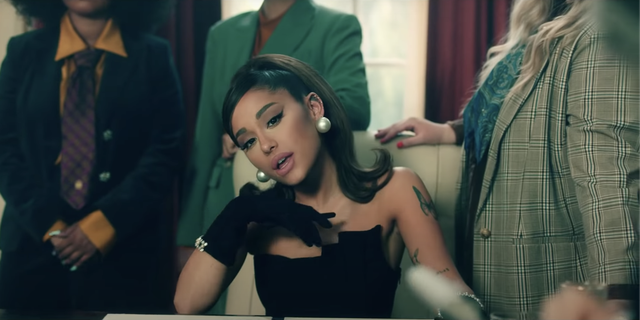 Ariana Grande becomes president in her new music video "Positions." Her sixth album is out now.

Grammy Award-winner Ariana Grande released her sixth studio album “Positions” on Friday, this being her third album in two years.
The Nickelodeon actress turned pop superstar is following up the success of “Sweetener” and “Thank U, Next” while ultimately following the same blueprint and using many of the same producers. While the aforementioned albums helped to thrust Grande into her own force and landed her an “Album of the Year” nomination, she now seems to be playing it safe, and her continued use of the same process may quickly lead to listener fatigue.
The appeal of “Sweetener” and “Thank U, Next” is apparent across “Positions.” The unique blending of genres like pop, R&B, hip-hop, jazz and neo-soul once again flood the tracklist. The album also welcomes a trio of guest appearances; Doja Cat, Ty Dolla $ign and returning collaborator The Weeknd. Grande also doubled down on the trap influence she flirted with in the past few years by bringing in trap producers Murda Beatz and London on da Track.
“Positions” navigates the themes of sex, love and trust across the difficult journey of falling in love again. While these themes have become a staple of Grande’s work, “Positions” is Grande’s most intimate album. While staying on theme, Grande takes a more unapologetic approach to her success and sexual desires which are accented with illustrative metaphors.
For example, one of the singles “34+35” (I’ll let you do the math), gives another meaning to the word positions and establishes the fun of the initial lust of a brewing relationship.
A few songs later, Grande once again enlists the help of The Weeknd, with the Canadian R&B singer contributing to “off the table.” This song takes a break from the hypnotizing power of lust and highlights Grande’s reluctance to fall in love again. The Weeknd then chimes in with another side of the equation by telling her that he’ll be patient with her but is afraid of waiting for nothing.

The album concludes with the beautiful “pov” which showcases Grande’s deeper vulnerability in a beautiful song that’s more about love for herself. Sonically, the song feels different from the previous tracks and the string instruments that exemplify a bulk of the production on the album are turned up to 11.
On “Positions” Grande reminds the world why we love her, but will also leave us wanting more, and not in a good way.
Grande has proven herself in the past few years as a capable pop titan and Coachella headliner but now seems afraid of taking the next step. While “Positions” has moments of greatness, a majority of this album will simply remind you of her last few years instead of building upon them. Melodies are being recycled, there are no risks, and it feels more like another iPhone release; great for super-fans, but overall just a small improvement on last year.
Many artists have made the mistake of abusing their once-successful formula, and it rarely works out in their favor. Grande has earned herself a risk, and with her talent, that risk may propel her into heights that have only been reached by a few, but the lack of risks will only lead to a weary fan base constantly in wonder about Grande’s full potential.