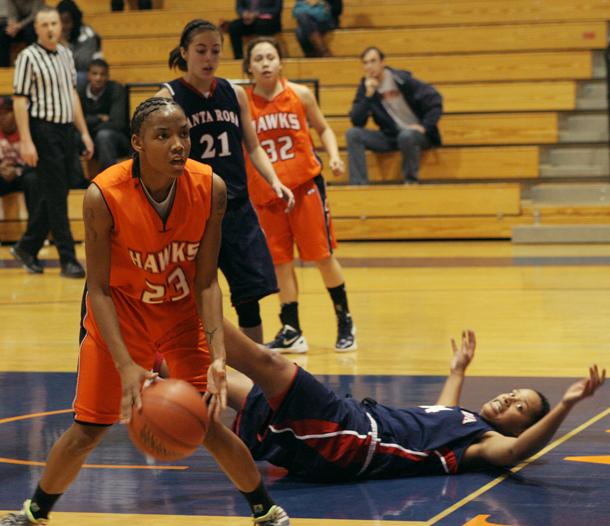 The Santa Rosa Bear Cubs came out of the gates strong and jumped out to a commanding 10-1 lead in the first 10 minutes of the half. Bear Cubs sophomore guard Jen Tsurumoto, who led all scorers with 24 points, would score the first three baskets.

Following the onslaught of offense put up by Santa Rosa, the Hawks rallied and went on a 16-15 run with 6:20 left in the half to cut the Bear Cubs lead down to 8.

“We weren’t doubting each other but we knew it was going to be a tough game,” said sophomore guard and forward Natalia Gibson. Gibson had 13 points on the night and would later be the game’s hero, sinking the game-winning shot with 3.4 seconds left in the game.

The Hawks would then cut the deficit in half yet again and end the first half down 26-30.

“They are a very tough team,” said Santa Rosa head coach Lacey Campbell. “They got some guards that can play and some post players that are big and physical.”

The Hawks took their first lead of the game five minutes into the second half.

The fouls would add up for Santa Rosa’s squad, who committed 16 total fouls. The Hawks would take advantage of those fouls and shot 65 percent (13-20) from the free-throw line.

With just 50 seconds left in the game, freshman guard Fernandi Espinosa would drain a two-pointer to bring the Hawks closer to Santa Rosa 58-59.

Santa Rosa regained possession and Tsurumoto was fouled by Gibson. Tsurumoto went to the free-throw line but missed both shots.

With only 30 seconds left in the game, and one opportunity for the Hawks to pull through, Gibson would take the game’s most critical shot and drain the 18-footer to seal the Hawks’ first victory over Santa Rosa in the team’s history. The win also secured them a spot atop the division.

An excited head coach Coral Sage would go on to dub the final result of the game as “one of the biggest wins in CRC history”.