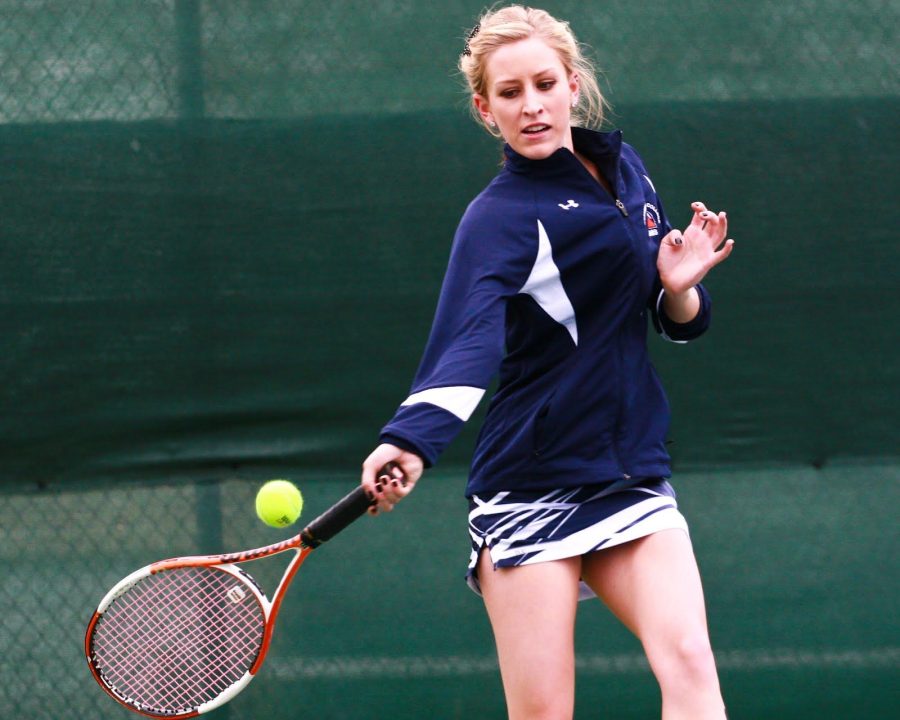 The women’s tennis team slices, rallies and lines up to run around the net and hit the ball back and forth to each other at its practices.

Unlike most players, Brianna Schmitgen, a 19-year-old undecided major, does so with a bright smile on her face, no matter how long she’s been at it.

Schmitgen is the team’s only sophomore player and currently plays in the number one position for the team. She has a personal 5-3 record.

However, her tennis career started well before her time at Cosumnes River College.

“I have been playing competitively since I was 12 years old,” Schmitgen said via email.

She started playing because tennis was all around her growing up.

“My whole entire family, including grandparents, have played tennis their whole lives,” Schmitgen said. “I grew up around it and it has become something that I love doing.”

Schmitgen’s mother, Darla Schmitgen, watched her daughter with pride from the bleachers during her match against Sacramento City College on Tuesday.

“She’s worked hard to get where she is,” Darla Schmitgen said.

Schmitgen went on to play for her varsity tennis team in high school, according to her profile on the CRC website.

Throughout her career, she has been honored with a number of awards.

In high school, she received a Leadership Award, Coaches Award and a Sportsmanship Award for Tennis, according to her profile.

“In college, I’ve gotten MVP as well as Mission Tournament Consellation Winner both this year and last,” she added.

Her biggest achievement was becoming the first ever doubles player to go to the state championships at CRC.

“Last year, I met a lot of great people and had great teammates who were very supportive,” Schmitgen said. “It was very surprising that we were the first people from CRC to go to state. It was definitely a great experience and I hope we do even better this year.”

Schmitgen said she has no long term tennis goals, but wishes to do better than in previous years. Schmitgen, who is uncertain about her future goals, and said she is leaning towards an education major.

Schmitgen’s teammates are thrilled to play on the team with her.

Coach Suzanne Stebbins only had positive things to say about Schmitgen.

“She is our only sophomore on the team and is our captain and leader,” Stebbins said. “All our girls look up to her, and she is a really positive influence on everybody.”