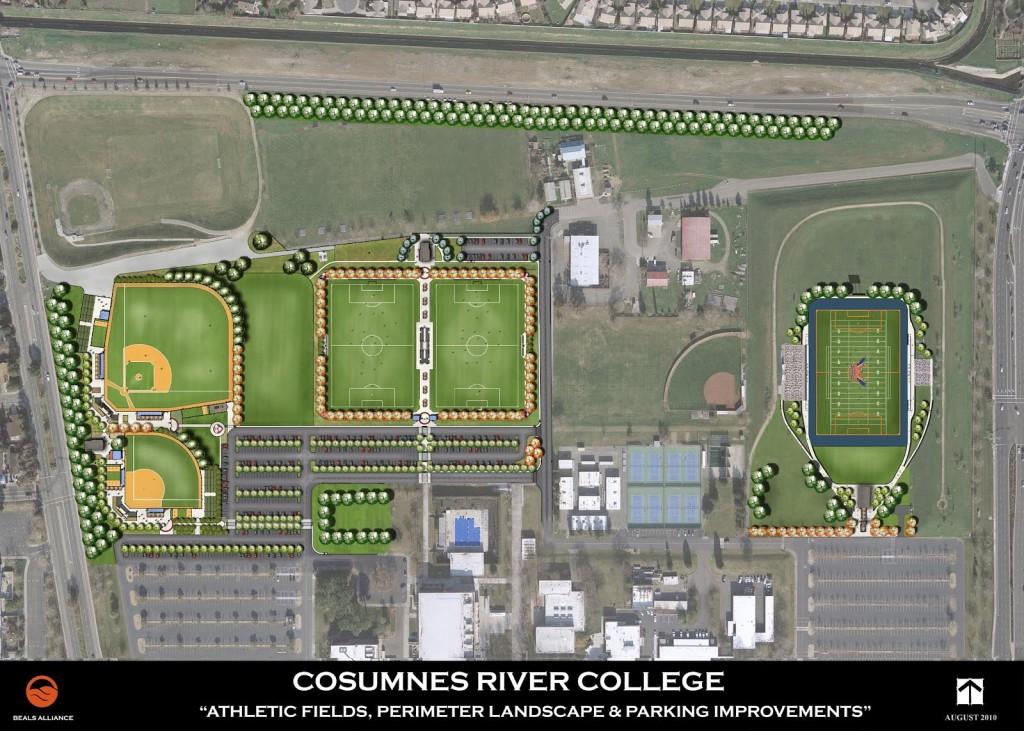 Jon Wilson, Connection Staff
A new baseball field, softball field and two new soccer fields are being built on the northwest side of campus near the Center Parkway entrance, while the stadium in the northeast corner of campus by the Bruceville entrance is being renovated.Cosumnes River College Athletic Director Liz Belyea said building new fields and renovating the stadium were tasks that needed to be completed for quite some time.“We needed new fields since the inception of the college, since 1970,” Belyea said. “These particular fields were part of a bond that was passed.”That bond is Measure M, which issued $475 million to improve student academic performance by building new facilities, and was passed by voters in 2008, according to the Los Rios Community College website.

CRC Director of Administrative Services Cory Wathen said the construction of the new fields and renovation of the stadium will improve the safety and playability of the fields.

Wathen said the previous fields were not level or had drainage problems, which caused issues of playability and safety. The new fields will be upgraded to collegiate-level fields with bleachers, press boxes, concession stands, restrooms, storage areas, new parking areas and accessible paths for the disabled.

The renovations also include building new roads and parking spaces that provide a permanent connection and accessible path of travel from the center of campus to the north buildings that house the vet tech, welding, construction, horticulture, campus maintenance and other college programs and services buildings, Wathen said.

The stadium–which is used for CRC soccer games at night, Valley High School football games and other community events–is not a new facility, but rather a renovation of the existing stadium to improve accessibility and to convert the field to an all-weather surface. The renovation of the stadium will also provide CRC with a safe alternative for playing soccer games at night or when bad weather threatens to cancel games.

The construction of the stadium and fields was originally expected to be completed in August, but Wathen said recent weather and some unforeseen circumstances with soil conditions, underground utilities and approvals by the Division of State Architects might push the completion date back a few weeks.

Wathen said school officials are working with the contractor to prioritize the most time-sensitive aspects of the project.

Wathen also said the school is still determining whether the delays will impact the readiness for the start of the fall soccer season or not. There may need to be some finish-work in the concession and restroom buildings or an installation of a lift for the bleachers in the stadium, and if the delays impact the ability to play on the fields, the Hawks would begin the season on the existing fields.