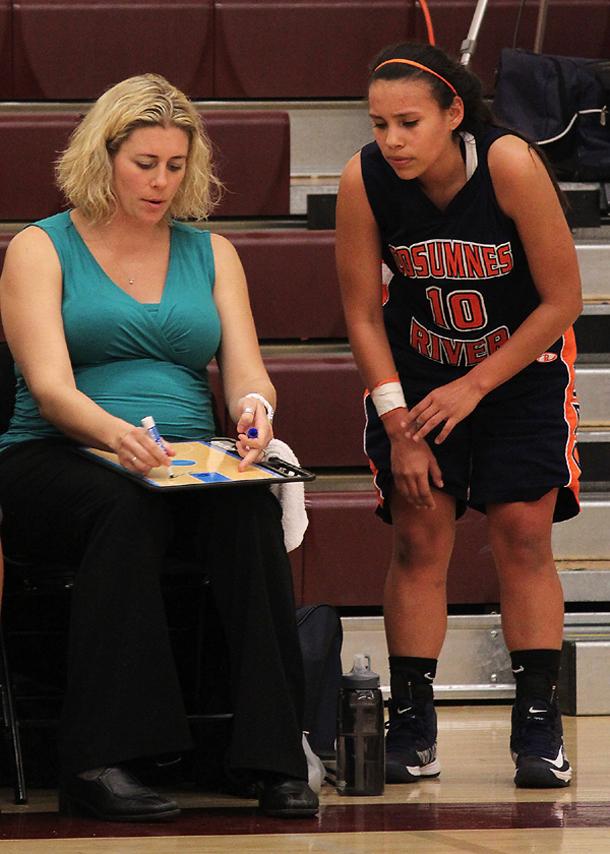 If you’ve attended a Hawks’ basketball game, then you’re bound to notice the often animated coach Coral Sage, who for nine years has paced the Cosumnes River College sidelines as head coach of the women’s basketball team.

As spring instruction begins, Sage continues to prepare the Hawks for success on and off the basketball court, while also juggling the preparation needed for the arrival of her first born child.

“Coaching takes a lot out of you,” Sage said. “And being pregnant even takes more out of you.”

To ensure that both she and the baby remain healthy throughout the season, Sage has taken special precaution to take time away from the court for much needed relaxation.

“I’ve had to find time for me personally to take naps when I can because I am up so early to get here for practice,” Sage said. “Typically I’ll have to go home and take a little bit of a nap in the afternoon.”

Sage described herself as an “active child” growing up. That same active nature would eventually lead to her decision to join the basketball team in fifth-grade, a decision she would quickly regret.

“I didn’t really like it at first, I was more of a softball player,” Sage said. “I just did it because it was something to do.”

Luckily for Sage, her fifth-grade coach begged her to continue playing basketball. Her exceptional play as a high school prep player grabbed the attention of university scouts, but a knee injury would force Sage to continue her playing career at the junior college level.

As a collegiate basketball player, Sage found success at all levels, winnings a state championship and all-conference honors at Sierra College before receiving a scholarship offer from University of California Riverside.

James Giacomazzi was hired as head coach of the CRC men’s basketball team the same year as Sage and admits to having a great amount of respect for the job she has done while at CRC.

“I have a lot of respect for her and what she does,” Giacomazzi said. “She’s a heck of a coach.”

Out of all the contributions she makes as part of the Hawks, CRC President Deborah Travis said that the greatest quality Sage exhibits is her caring nature towards her players, which has helped to make them successful on and off the court.

Sage hopes to duplicate these successes, while of course doing what’s best for another future member of the Hawks’ family.

“I’m doing what’s right for my body and my baby while also being there for my team as well.”