The atmosphere was set for baseball at Conway Field as the Cosumnes River College Hawks welcomed their regional rivals, the American River College Beavers for the last CRC home game of the season on April 25.

Both teams came into the game already eliminated from the playoffs and it showed as both teams allowed fielding and mental errors to keep the game close in the early innings.

“It was a rough game, both sides kind of struggled defensively,” said Hawks’ freshman catcher Cody Morris. “I was worried for a minute, but I knew that Harry [Blake Harrison] was going to do the job and get us out.”

The Beavers and Hawks battled back and forth in the early innings. For the first four frames, it seemed like neither team was able to grab ground. 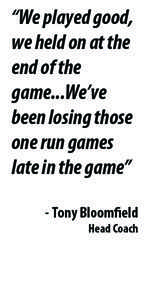 The Beavers were able to score the first run of the game in the first inning. Following a successful stolen base attempt, Beavers’ sophomore outfielder Greg Harris was driven home on a groundout to second base. The Hawks, not to be outdone, tied the game in the bottom of the second inning. Freshman infielder Hunter Carolan smoked a pitch to right field, scoring Morris and tying the game at one.

Morris replaced Hawks’ sophomore catcher Bryan Case at his usual position behind the plate and made the most of the opportunity. Morris hit his first home run of the season in the bottom of the fourth inning, breaking a 3-3 tie.

“He hit that ball out, I think he had two of three hits for the game,” said head coach Tony Bloomfield. “He played well today.”

Morris’ home run was the fifth of the year for the Hawks, placing them in second place in team home runs in the Big 8 conference behind Sierra College who has a commanding lead at 14 home runs.

The Hawks broke the game open in the fifth inning, scoring three runs while forcing Beavers’ freshman starting pitcher Chase Hunt-Murray out of the game. Morris added two more to his RBI total after driving home freshman infielder Michael Chavarria and sophomore first baseman Garrett Heissinger. Carolan followed with a single, bringing home Morris. The Hawks ended the fifth, with a 7-4 lead. Neither team would score again until the eighth inning.

Cosumnes took the field in the ninth inning with a comfortable 8-4 lead following an insurance run in the bottom of the eighth, but as every baseball fan knows: it’s not over, till it’s over.

Down, but not out, the Beavers’ bats came alive in the top of the ninth inning. CRC’s freshman pitcher Blake Harrison allowed three runs in the ninth before shutting the door on the Beavers and wrapping up the last Hawks’ home game of the season 8-7.

“We played good, we held on at the end of the game,” Bloomfield said. “We’ve been losing those one run games late in the game.”

Despite today’s win, Case was still put off by the team’s overall season performance. The belief among the players coming into the season was that the team would return to the playoffs, but this year the Hawks will have to follow the playoffs from home.

“It was definitely disappointing,” Case said. “I think we all thought we should have done better.”