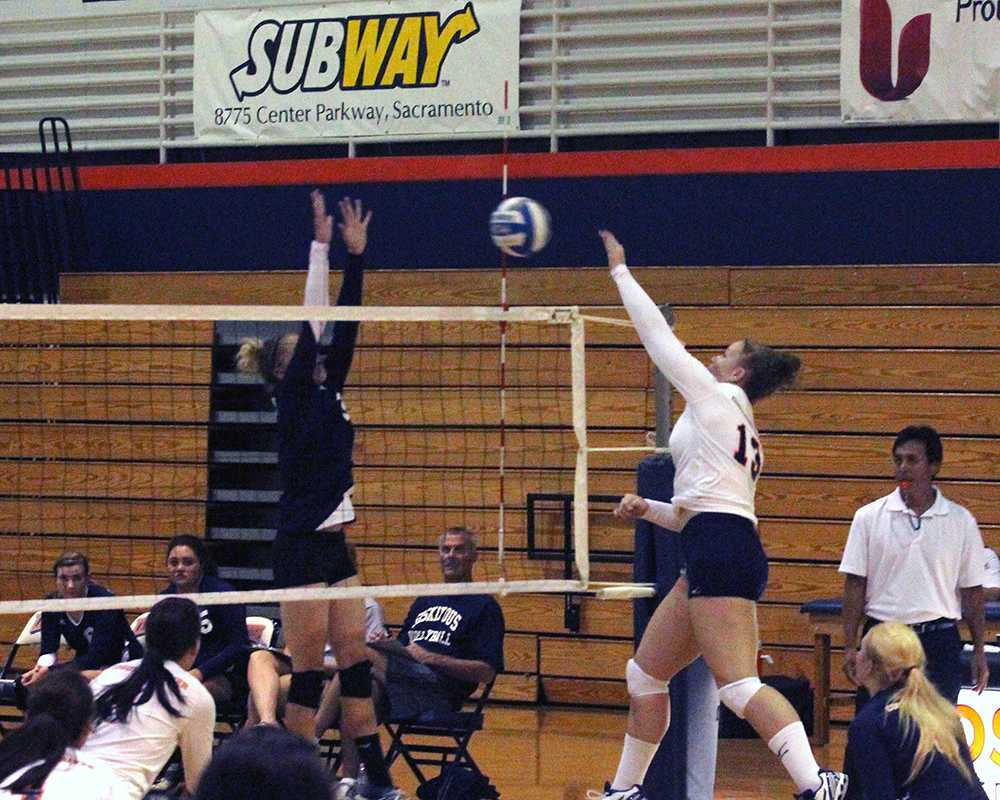 Freshman opposite Jennifer Lysaght spikes the ball against College of the Siskiyous in the first game of the Cosumnes River College Three-way Mini-tourney on Sept. 13. The Hawks fell to second place in the third match after losing to De Anza College.

In Cosumnes River College’s mini tournament against College of the Siskiyous and De Anza College on Friday, the Hawks came in second place.

Game 1: Cosumnes River College vs. College of the Siskiyous
The Hawks beat the Siskiyous Eagles in the team’s first game of the one day tournament in straight sets.

“We played a lot better than we did on Wednesday, being able to really work on our mental game and execute what we’ve been working on in practice,” said CRC’s volleyball co-head coach, Natalie Wells.

Game one was a close game, with the Hawks narrowly defeating the Eagles.

Hawks sophomore setter Candice Bohlmann served the ball over the net for an ace that started a Hawks rally.The Hawks took game one with a score of 26-24.

“In the first game in the first match we were pleased that we were able to fight and finish in three sets and come from behind and win,” Wells said.

In set two, the Hawks had an early lead against the Siskiyous Eagles. Siskiyous called a timeout while the Hawks lead 21-20. The Hawks didn’t slow down after the timeout beating Siskiyous 25-21.

In set three, the Hawks took a commanding lead, leading 8-1 when Siskiyous called a timeout to try to rally their players.

Hawks’ freshman outside hitter Jennifer Lysaght dominated the net in game three with a block to tie the game 25-25. The Hawks came back to finish the match with the score at 27-25.
Game 2: De Anza College vs. Siskiyous
De Anza defeated Siskiyous, taking all three sets, putting Siskiyous in last place in the tournament.
Game 3: CRC vs. De Anza
The Hawks lost to De Anza 3-0 putting the Hawks in second place in the tournament.

In set one against De Anza, Lysaght and freshman middle hitter Tierra Collier dominated over the net, De Anza took game one with a narrow lead of 21-25.

In game two De Anza had a Healthy lead causing the Hawks to call a timeout with the score 3-10 with De Anza Leading. Hawks do what they can to catch up but De Anza Refused to allow the Hawks to take the lead. De Anza took game two with a score of 14-25.

The Hawks took an early lead with De Anza trailing 9-5. Hawks and De Anza Fight for the lead going back and forth with De Anza lead then the Hawks lead. De Anza would take the lead and hold it finishing game three with a score of 21-25, and won the match 3-0.

After the match Wells went on to say, “This is just preseason right now so this was a good way to see what we need to work on to get ready for conference.”