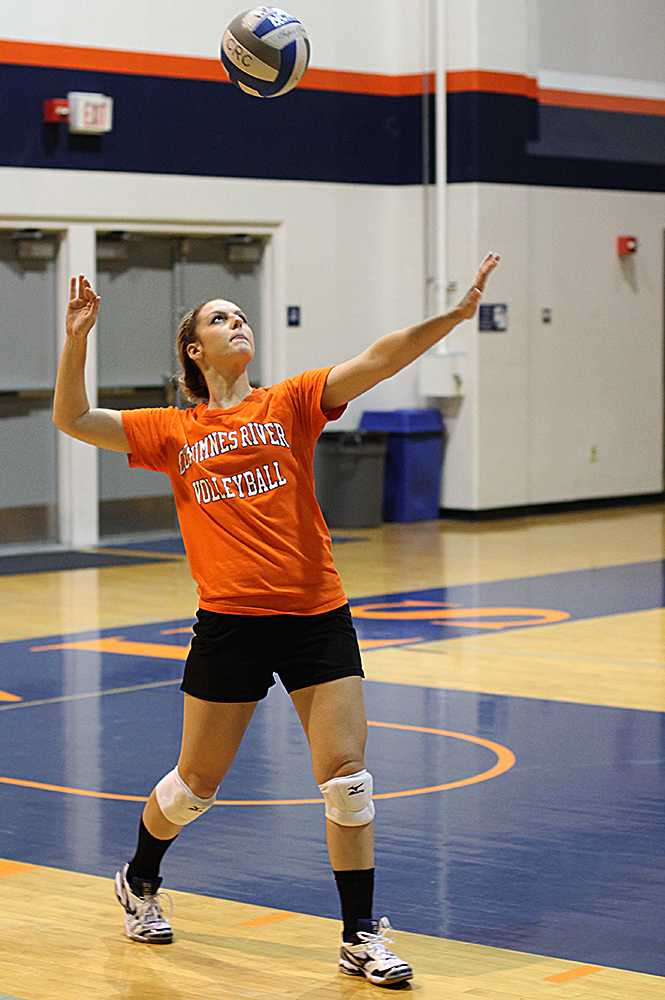 Sophomore setter and opposite hitter Laura Villano practices serving in a team practice scrimmage on Oct. 1. Villano plays for both the volleyball and softball teams at Cosumnes River College.

Typically, students find their plates sufficiently filled while participating in a single sport. After all, playing a sport at the community college level is a demanding task.

Student athletes must maintain a passing grade point average coupled with a full schedule and are often expected to take more units in the semester of their offseason.

For 19-year-old sophomore Laura Villano, there is no offseason.

Villano currently serves on the Cosumnes River College Hawks’ volleyball team as a setter and opposite hitter.

Unlike most fall athletes who will be hanging up their uniforms for the spring semester, Villano will be changing into her CRC softball uniform.

Villano, who began playing volleyball in seventh grade and competitive softball when she was “about 7,” originally intended to stick with just volleyball at CRC. However, in the spring 2013 season, she was scouted by a softball team hurting for players.

“I thought I was burnt out after my senior year, because I played it for so long,” Villano said. “But I ended up playing.”

“She was a big asset to the team,” Schroeder said. “She’s a very positive person, always comes with great energy and a great attitude … worked as hard or harder than anybody on the team.”

CRC co-head volleyball coach Natalie Wells praised Villano’s leadership abilities and related her position as a setter to the quarterback of a football team.

“As a sophomore, I think the other players look to her,” Wells said. “But even within that, I look to her to help lead the court.”

Villano stated that she doesn’t plan to continue sports after she transfers to a four-year university, instead choosing to pursue her broadcast journalism degree. However, she doesn’t let that affect the effort she puts into the sports she plays now.

“If you’re an athlete and you play at this level, don’t take it for granted,” Villano said. “Treat every practice as an experience and learn to get better.”