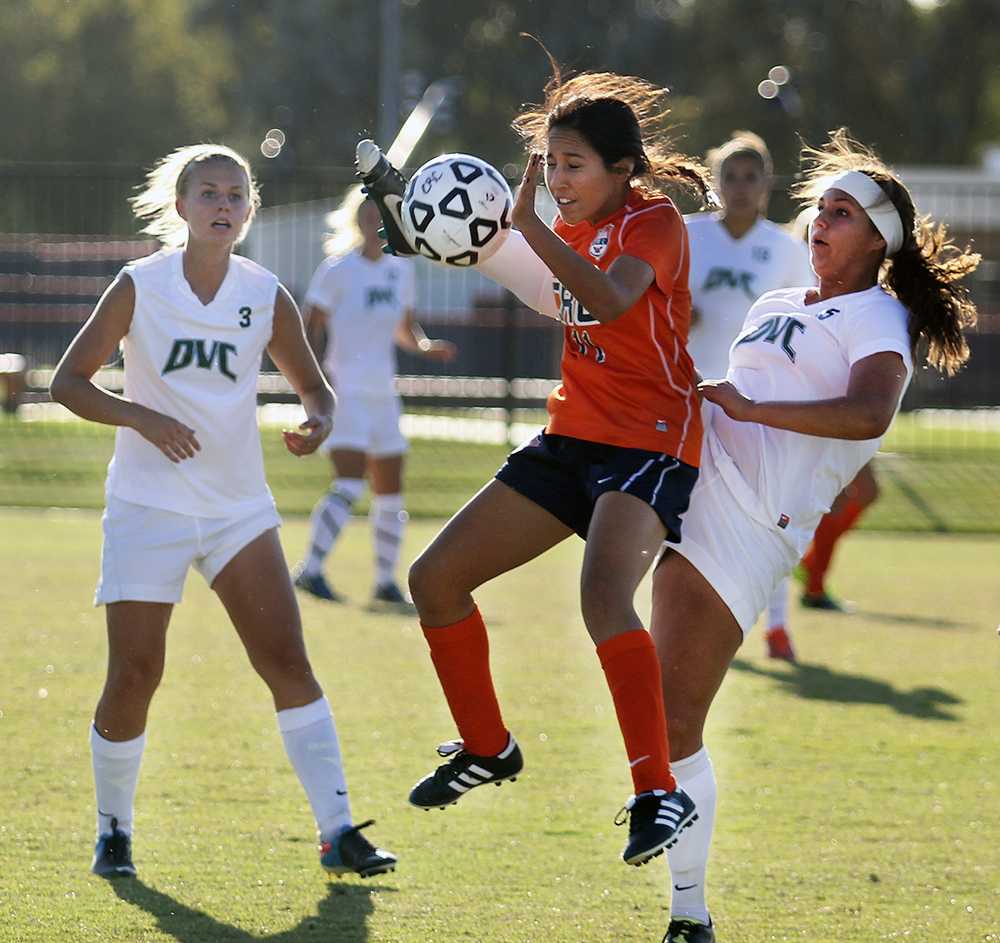 CRC freshman defender Selina Barbosa goes up for a header while being contended by Diablo Valley College freshman defender Desiree Mesa on Oct. 4. The Hawks and the Vikings were locked in a defensive struggle all game long.

The Hawks’ shutout streak was snapped within a minute of play against Diablo Valley College. That’s all it would take to drop the Hawks’ record to 3-1.

DVC sophomore midfielder Krista Bartzi, who scored the only goal of the game, said the team “needed to score early and keep that lead.”

“Honestly, I feel like they weren’t ready for us,” Cremisio said. “I feel like as soon as we scored, I didn’t see much emotion from their team at all. And halftime, I was telling my team I feel like that was almost kind of affecting us, so I told them, ‘second half we need to make sure we came out with high intensity.’ ”

Throughout the first half of the game, Diablo Valley dominated possession, keeping the pressure on the Hawks’ defenders. The few times the Hawks took control of the ball, the offense did not capitalize.

The game was a big defensive battle that kept the score locked 1-0 in favor of Diablo Valley. Hawks’ freshman goalkeeper Anna Brown kept Diablo Valley from adding to their lead.

After the half, the Hawks maintained possession, keeping Diablo Valley to a limited number of trips past midfield.

However, the Hawks could not score a goal in their few shots, with DVC’s goalkeeper blocking one shot with her forearms, and another bouncing off the right goal post.

Brown said that the loss is on the whole team, and that keeping Diablo from adding to their score was part of it, but that she could have played better.

“We didn’t play our best, by far,” Brown said. “We were really weak to the ball. This was definitely our worst game.”

Cosumnes head coach Cesar Plasencia said that it was a bad game and the team was
“flat.”

“We’ll be okay, my team is a good team,” Plasencia said.