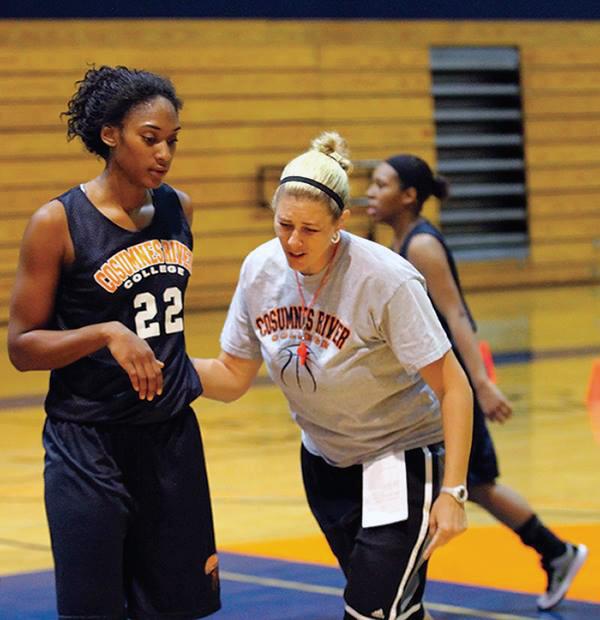 As November approaches, the Cosumnes River College women’s basketball team is all set and gearing up to make some noise in this Big 8 Conference this season.

After narrowly making it into the playoffs as an 18 seed a year ago, the Hawks know they are going to need a mix of returning sophomores and talented incoming freshman to step up to repeat their prior success.

“I think this is our most talented team that I’ve ever had,” said CRC head coach Coral Sage. “We have all the key pieces we need: a good point guard, a great post player and good shooters.”

Last season, CRC started off strong in the preseason with a 10-4 record but struggled in conference play by adding only four wins to their record.

“We need to be more consistent and not drop off,” Sage said. “Conference is extremely tough, but we need to continue building on our talent through the year.”

Only three players are returning from last year’s group, and only saw playing time.

Luckily for the Hawks, their leading scorer from last season and all Big 8 Conference player sophomore guard Jade Sowell-Hundon returns. Sowell-Hundon averaged 14 points a game last season while playing 20 minutes per game; a role which should be increased this season.

“We are a pretty aggressive team,” Sowell-Hundon said. “We have the talent, we have the skills, all we need is the mental toughness to carry us through.”

Along with Sowell-Hundon, sophomore guard Miya Oaks looks to build on her freshman season where she averaged 3.4 points a game, while averaging 15 minutes of playing time. Oaks had the best assist-to-turnover ratio on the team last year at 1.2.

“I have to be a leader and the experience I have will help the younger team,” Oaks said. “I think we should great, I am really excited.”

“Sometimes they can come out and not know what to expect and great things happen, other times you can get a group where they are so nervous they play timid,” Sage said. “But I think with this group they are going to come out playing hard because we practice hard and smart.”

One characteristic the Hawks look to use to win games this year is speed.

CRC finished second in the Big 8 last year in scoring at just over 46.5 points per game and will run-and-gun this year with eight guards.

In addition to using speed to win games, the Hawks look to establish some post presence, which was lacking last year.

“We have two post players this year and we didn’t have any true post last year so that will make a big difference as well,” Oaks said.

Although 5-foot-11-inch Janie Myles did not play last year due to transfer rules, she practiced with the team all year and should establish a presence down low.

“I need to be strong in the post, make my shots, layups and rebound,” Myles said.

CRC will get its season started Nov. 8 at San Joaquin Delta College in the Jocelyn Mancebo Classic.