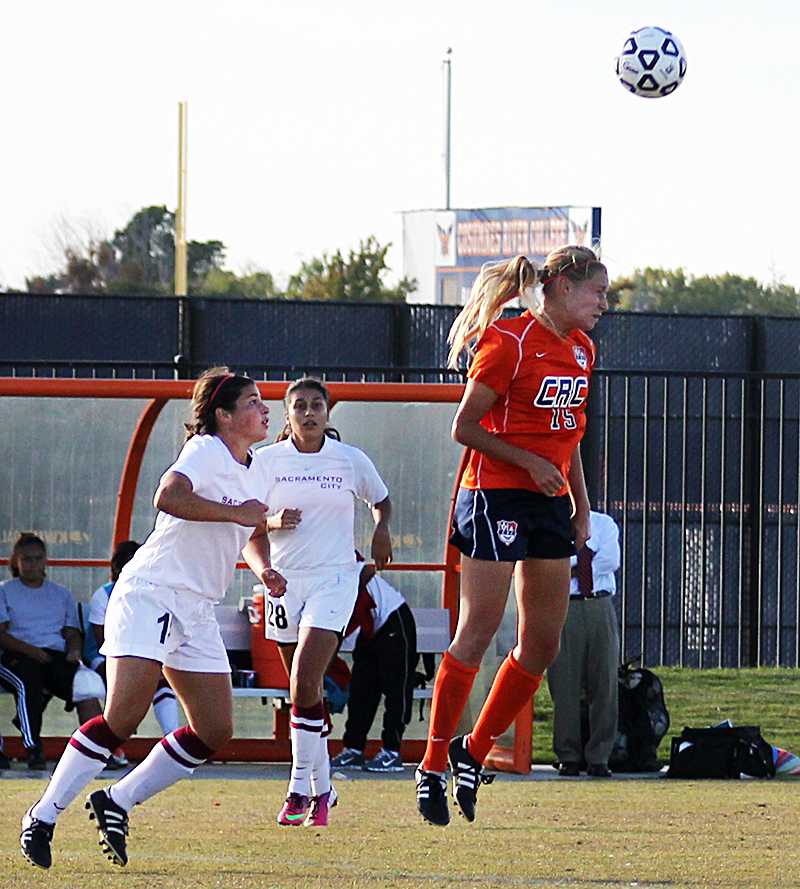 CRC spent the majority of the first half passing the ball and trying to score a goal, but to no avail. Both teams tried to score a goal but sailed over or went past the net, as well as the goalkeepers for each respective team caught the ball from each goal attempt.

For the majority of the first half, no goal had been made.

Towards the end of the first half, CRC sophomore forward Vilma Gonzalez tripped and fell over freshman midfielder Fianna Correa of Sac City.

After that, Gonzalez scored the Hawks’ first goal of the match on a penalty kick. The first half ended with a score of 1-0.

Gonzalez said that the team could have done better in this game despite their victory.

“I feel like we weren’t as aggressive as we should have been,” Gonzalez said. “I think that if we had a better game, we could play better and we didn’t show that today.”

The second half started with Sac City in possession of the ball.

CRC had a great chance for a goal when freshman midfielder Kylie Forbes did a header towards Sac City’s goal but the ball sailed over the goal.

Not long after that, Gonzalez scored another goal for CRC. Gonzalez was close to Sac City’s goal line and kicked the ball right into the net.

Freshman defender Selina Barbosa had a wide-open goal attempt, but missed the goal as the ball hit the post. It remained a 2-0 in CRC’s favor.

Freshman forward Breonna Robinzine got a yellow card for kicking before the whistle was blown. Towards the end of the second half, Kylie Forbes tripped and fell, but wasn’t injured and still continued to play for the rest of the game.

The final result of the match was 2-0. CRC won the game.

Head coach Cesar Plasencia felt that the team could have done a lot better despite their victory. He said that the Hawks lacked intensity.

“We won, we didn’t play very well, but we won,” Plasencia said. “In the end we got we wanted.”

Freshman defender Kori Martin said that the team did well in the game.

“I thought it was good,” Martin said. “I thought we did a lot of good through-balls to each other and we all encouraged each other pretty well.”