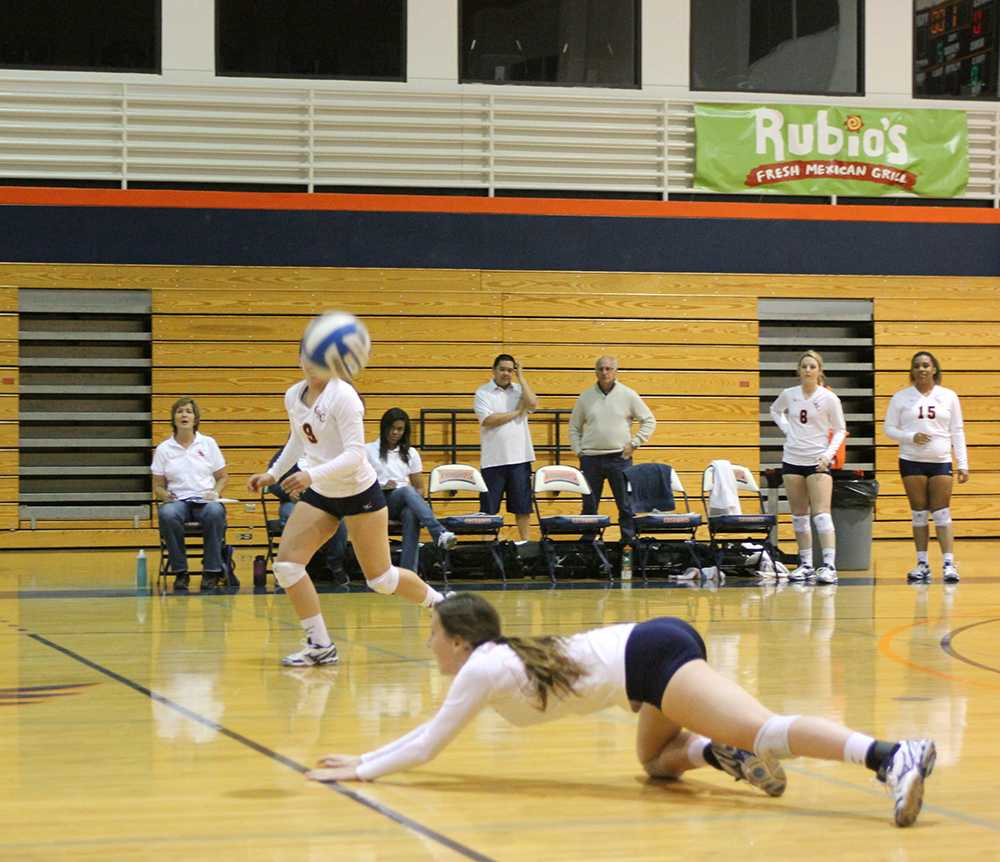 Sophomore outside hitter Gabrielle Hinz dives and saves a ball from hitting the floor on Nov. 6.

However, In Cosumnes River College’s game against Diablo Valley College on Nov. 6 the Hawks would fail to do so, losing the match in three sets.

In game one of the match, the Hawks went back and forth fighting for the lead against the Vikings. Hawks sophomore outside hitter scored a big point to take the lead at 8-7.

But, the Vikings took quick control of the game after the ace due to a CRC error and maintained the lead until the end of the first set, winning 25-13.

“We could have had it but we gave up too soon,” said CRC freshman outside hitter Nancy Pacheco.

In game two, the Hawks fought to keep the lead against the Vikings, but to no avail.

Hawks tried to hold onto the lead but failed as the Vikings rallied, forcing a Hawks’ timeout at a 21-17 score.

Hawks fought back to stay alive in this game and gained lead, causing the Vikings to call a timeout of their own at 22 – 21.

After the timeout, the Vikings gained the lead and went on to win the set 25-22.

In game three, the Hawks fought back and forth for the lead for the majority of the set.

However, the Vikings scored to start a rally and take the lead.

But CRC would answer when Hawks’ freshman opposite hitter Jennifer Lysaght spikes the ball over the net to score to take the lead 10 – 9.

Hawks tied the game after freshman middle hitter Tierra Collier spiked the ball over the net, making the score 13 – 13.

The Hawks would call a timeout while the Vikings were ahead at 19 – 16. The Vikings maintained that lead until the end of the game. As a result Hawks lost 25 – 18.

After the game Madriago went on to say, “we all made mistakes, it’s a team sport, we all have to take the blame and it’s everyone’s fault.