From Spain to CRC: A soccer player’s journey 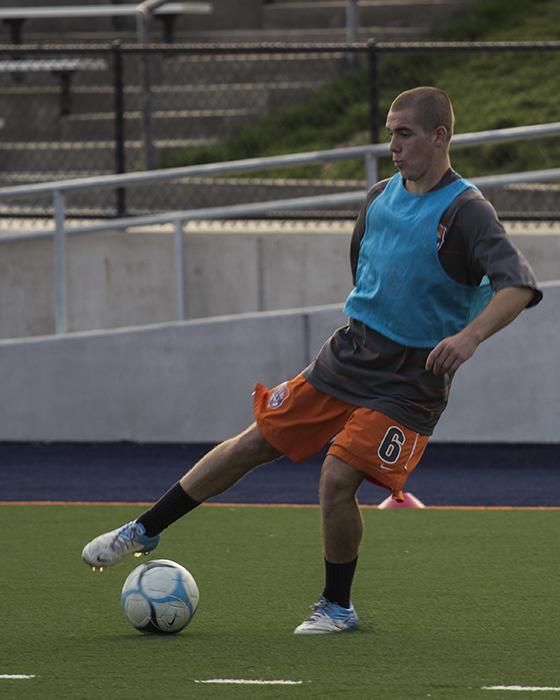 Freshmn midfielder Ander Saez dribbles the ball during a drill in team practice on Nov. 12.

Cosumnes River College was fortunate enough to receive one of those dreamers all the way from Spain. Freshman midfielder Ander Saez, 19,  has proven to be more than just an asset to the CRC men’s soccer team.

“There has only been two times were coaches haven’t come to me and asked me who is that number six after the match,” said head coach Ron Preble. “Which is a true tribute to him when other coaches are coming to me asking me about him.”

Now one might wonder why a player from Spain would want to play in The U.S.

Saez said that people pay more attention to soccer here in the States and to the future of its players. He said that he’s more than happy to be here and “It feels really good.”

Saez’s intentions were to attend school at the University of California, Davis, and be apart of their soccer program. But with UCD and its strict grade point average criteria, he is required to prove not only his talent as a soccer player, but his ability to be a successful member of academia as well.

“They told me about Ron and the program he has here [at CRC],” Saez said. “It was a nice one and that’s why I was told to come here.”

Saez who started playing soccer in Spain, has been playing since he was very young.

“Being from Spain the culture of soccer is maybe a little bit different there than it is here,” Preble said. “So we had some characteristics that we kind of had to get squared away but he’s a very good competitor and kind of fiery, which is something that we like a lot about him.”

Preble mentioned how good Saez is at getting the ball around the field and getting teammates involved, calling Saez “an architect of the game.”

Saez has managed to make quite the impression upon his teammates as well. Sophomore Midfielder Eliezer Ramos expressed that Saez is the type to never give up.

“He’s a good person, he has a good heart,” Ramos said.

But being from Spain doesn’t mean that Saez gets any special treatment.

“I try to treat him like any other person here,” Ramos said

Ramos also expressed his admiration for Saez’s work ethic, he said that if Saez continues playing the way that he does that he will definitely go somewhere.

Do we have a super star in the making? How does Saez stack up to other players in the Junior College league?

“Truthfully in my opinion he’s been in the top two, three, four guys that I’ve seen all year at the JC level,” Preble said.

Preble went on to say many more great things about about Saez.

“I just can’t talk about him enough,” Preble said.