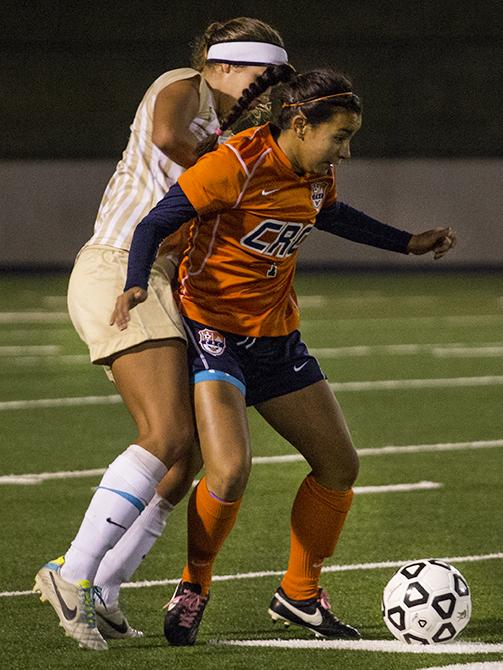 Cosumnes River College Hawks sophomore forward Alyssa Hanks battled for control of the ball against a San Joaquin Delta College defender in their playoff game on Nov. 23. Hanks scored the lone goal of the game.

Heavily bundled, a small crowd braved the cold night to watch the women’s soccer team take on the San Joaquin Delta College Mustangs under the lights of the Cosumnes River College Stadium for the first round of the state playoffs on Nov. 23.

Ending the regular season in third place in the conference, the Hawks beat the Mustangs in the first round of the California Community College Athletic Association State Championships.

“We got a lot of freshman so this is their first taste of playoffs. Last year we got eliminated in the first round,” said Hawks’ head coach Cesar Plasencia. “I think my sophomores learned from that and my freshman obviously got one under their belt now.”

Coming into the playoffs required a different mindset for the team over the regular season.

“I knew it was going to be extremely different, everyone is going to have higher intensity,” said sophomore midfielder Kaylyn Toyama. “It’s not a normal game. Everyone is going to give it their all, [because] for some people it’s their last game. That is what really brings everyone together, knowing that.”

A tense game of back and forth began as both teams battled for dominance, neither one being able to score a goal in the first half.

The tense nature of the game extended beyond the field as a fan in the stands became livid with a referee’s call, yelling a string of profanities before being escorted from the field by campus police.

With the score 0-0 still at the start of the second, it seemed that the next half of the game would be similar to the first. But, at just over 60 minutes into the game, sophomore forward Alyssa Hanks brought the stalemate to an end.

“I just saw the ball get chipped in the corner and my player was in front of me, and I didn’t’ know if it was going to go over,” Hanks said. “As it dropped it missed her head and I told myself just place it in the corner, don’t try to bang it, because it beat the goalie. So I was just talking to myself the whole time.”

After Hank’s goal, the game resumed its standoff quality as the Hawks managed to keep the opposing team from scoring through the end of the game, clinching it 1-0.

While the team won, there was one thing about the game that stood out to Plasencia.

“We gotta have more composure when the game is on the line,” Plasencia said. “I thought we panicked a little bit tonight and it didn’t allow us to solve some problems and we put ourselves under more pressure than we needed to be under.”

While Plasencia said what needed to be improved, he said there was a lesson learned by the team in their first round of play.

“They realized it takes a lot of grit in the playoffs and sometimes it’s not as pretty as they would like it, but you’ve got to battle, you’ve got to work,” Plasencia said.

This is a sentiment shared by members on the team, like Hanks.

“You have to have more intensity and be ready because everyone is going to fight to the end and never give up,” Hanks said. “Because it’s your last chance, either you win or you go home.”

It’s that fighting spirit that has Hanks sights and goals set high.

“I think we have the capability to make it through the final four,” Hanks said. “We just have to bring our intensity every game and step up and learn from every game, and never give up.”