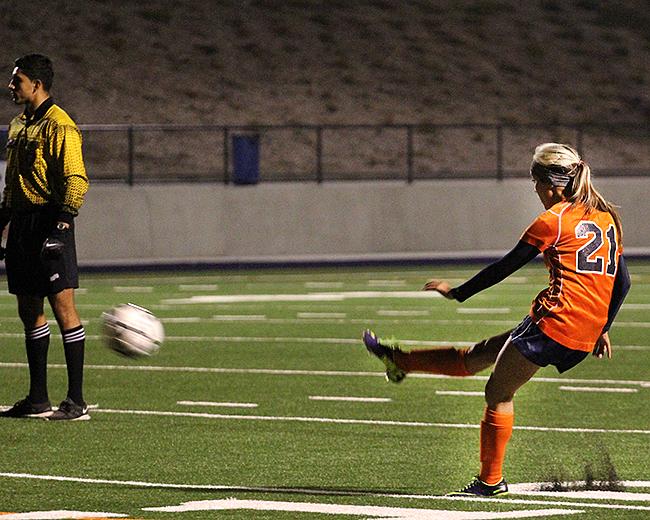 Sophomore midfielder Kaylyn Toyama takes a free kick and sends the ball sailing into the top-right corner of the goal in Cosumnes River College's playoff game against Santa Rosa Junior College on Nov. 26. Toyama's goal was the only goal scored in the game.

With the lights of the Cosumnes River College Stadium beaming down onto the turf, the Hawks battled the cold weather and the Bear Cubs of Santa Rosa Junior College on Nov. 26.

The game would prove to be a one-goal slugfest, with CRC pulling out a hard-fought victory.

“We played really well today, we brought all elements to the game,” said CRC head coach Cesar Plasencia. “We scored a phenomenal goal and played well throughout the game.”

While the Hawks got the win, it was Santa Rosa that took control of the match early, winning the 50-50 battles and the possession game.

That wouldn’t last long, as CRC would be the first to fire on net in the seventh minute of the game, and soon started to take a few more chances on goal.

But that trend did not continue as Santa Rosa slowly grappled back control of the game in the waning minutes of the first half.

Bear Cub freshman midfielder Dana Dibble nearly put Santa Rosa in the lead when her shot from distance sailed just a yard right of the goal.

Her teammate, sophomore midfielder Courtney Rebata, possibly had the Bear Cubs’ best chance of the half, but her shot was saved by CRC freshman goalkeeper Anna Brown with seven minutes left in the half.

“They weren’t spectacular saves, they [the shots] were right to me most of the time,” Brown said.

The first half ended in a 0-0 deadlock, setting up a huge second half.

Santa Rosa was awarded a free kick near the beginning of the second half that lead to a dangerous header in the 18-yard box, but it was hit wide left.

Then in the 54th minute of the match, Bear Cubs’ freshman midfielder Taylor Halstenson drilled a liner on a goal that went only a foot over the crossbar.

That shot would prove to be a huge miss, as moments later CRC sophomore midfielder Kaylyn Toyama nailed a free kick in the top right corner of the goal, putting CRC up 1-0.

As the shot went in, Toyama’s teammates tackled her in the middle of the field in celebration of the goal.

“It’s just a normal day, that’s all I think when I take free kicks not to psyche myself out,” Toyama said.

However, that one-goal lead would be tested a few more times before the game ended.

Halstenson would get another big chance on net, but again the ball sailed over the net. In the resulting free kick, Brown would receive what looked to be a questionable yellow card on a delay of game call.

“I wanted to place the ball on the other side, I don’t know what the big deal is, I wasn’t trying to waste time,” Brown said.

It was that fiery attitude that perhaps saved the game for the Hawks in the last play of the match.

One last chance from Halstenson would be saved by Brown on a line drive shot right to her.

That lone goal would prove to be the magic formula for the Hawks, as they would go on to win the game and advance to the third round of the state playoffs.

But, as many coaches do, Plasencia was looking forward to see what CRC needed to do to win the next game.

“We’ve got to polish up some passing, we weren’t as sharp with our passing as we normally are,” he said. “We have to make quicker decisions.”