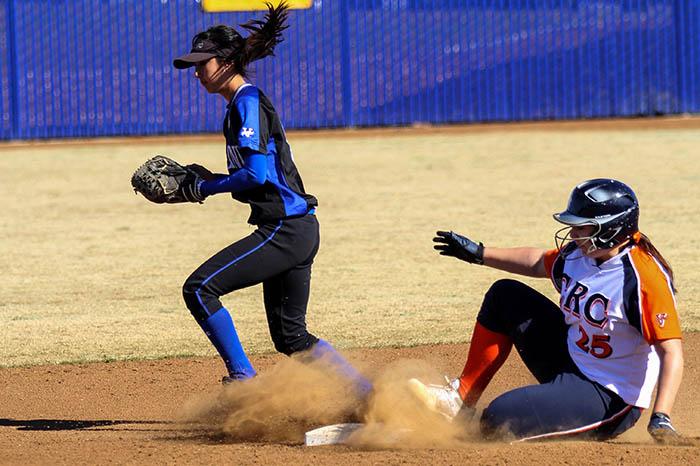 Then-freshman pitcher Jessica Venturelli slides safely on to second base in the Feb. 9 game against Solano College. Venturelli is one of the few players from the 2013 season expected to return for 2014.

Near the end of the 2013 softball season, the Hawks were in a dire situation. In order to make it to postseason play, the team needed to put together a late win streak, but eventually fell short.

During the offseason, Cosumnes River College head coach Kristy Schroeder had to prepare returning players for the spring season, as well as recruit new players. In this endeavor she seems to have been successful, as Schroeder said she is confident in how the team is shaping up.

“I think it [the spring season] is looking positive,” Schroeder said. “We’re very young, but we have a lot of skilled athletes.”

Only three players from last season are returning to the team: sophomores Amy Pedretti, who played second base, pitcher Jessica Venturelli and Laura Villano.

With a batch of young players, there are always hurdles to overcome, and scrimmages in the fall help to spotlight them.

“We make a lot of mental errors, myself included, and [the team needs to] just work on that,” Venturelli said. “I think if we can fix the mental part of the game, the physical part will come naturally.”

Over the last season, one thing Schroeder said time and time again was that the team was lacking speed, which they have improved on, not only in base running, but also with the infield players.

“We have a lot more speed, which will be nice for taking extra bases, things like that,” Venturelli said.

In the 2013 season, the Hawks relied heavily on then-sophomore pitcher Allison Barsetti, who started and played in the majority of the games throughout the season. Schroeder said that the pitching was “limited,” and that she had to play the pitchers throughout games, even if they were struggling.

Schroeder said that over fall, the Hawks had two pitchers and have added three more in the spring, which would help spread out the pitching duties.

While Schroeder made it a point to say how much the pitching would improve their game, that isn’t the only aspect of the game the young team will bring.

“Our hitting is a big advantage,” said freshman pitcher Amanda Horbasch. “In the beginning, I don’t think anyone thought we’d be a big hitting team and it turns out we are.”

Another strong element from the 2013 season was that a lot of the teammates were close friends, this year Schroeder said most of the girls came into the current team having never known each other.

“We all get along really well, so that helps,” Horbasch said. She continued to say that the team getting along is an advantage that will help with communication while fielding.

Overall, Schroeder is excited for the coming season and the potential of her team.

“Most of these players have been playing travel ball, and [have] been playing for a long time,” Schroeder said. “Hopefully they’ll be able to pick up and we should be competing for a Big 8 title this season. I’m looking to go to postseason and planning around that. Obviously we have to take it one game at a time.”