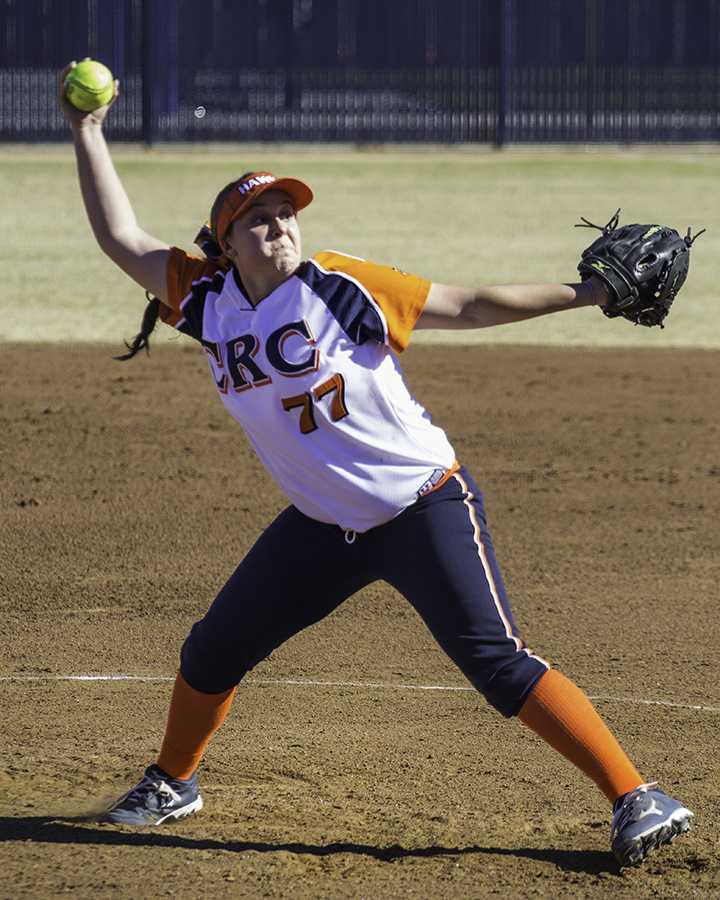 Freshman pitcher Amanda Horbasch threw a shutout game with 13 strikeouts in Cosumnes River College's home opener against Lassen Community College. The game was called in the bottom of the sixth inning when the Hawks scored their eighth unanswered run of the game.

It was with this in mind that freshman Amanda Horbasch went into the first game of the season against Lassen Community College.

Sophomore pitcher and outfielder Jessica Venturelli described Horbasch as collected in the dugout before a game.

“She doesn’t look nervous, she’s usually just joking around with all of us and ready to go,” Venturelli said. “She’s not super serious, but you can tell she’s ready to get out there.”

Horbasch started off strong with the Hawks in the opener, striking out 13 batters in a complete game shutout. On top of that, she hit 2-3 and batted in the bottom of the fifth inning.

Horbasch finished Woodcreek High School in 2013 with three years of varsity softball under her belt. At 19 years old, she has played softball for 14 years.

Her dad played baseball when she was a child, which sparked her interest for the sport when he wanted to get her into athletics.

With an overall ERA of 1.34 and 311 strikeouts over 282 innings pitched on her high school varsity team, it’s no surprise that Schroeder wanted Horbasch on her team.

“We try to recruit good Sacramento talent … and we got lucky to snatch her up,” Schroeder said.

Schroeder said that Horbasch and her friend, freshman first baseman Briana Cherry, live in the area. Schroeder said she watched them both play.

Horbasch said that Schroeder was a big part of why she came to CRC.

“I love the school, I love the softball team,” Horbasch said. “I came to watch some games and really liked the way Schroeder coaches.”

“She gives 110 percent,” Cherry said; the two have played together since they were in eighth grade. “She’ll pick anybody up if they need to be picked up. She’s always positive.”

“She’s got a lot of energy when she’s pitching and she’s focused,” Wilkins said. “She does what needs to be done.”

Off the field, Wilkins and Venturelli both described Horbasch as friendly.

“She’s fun to be around and easy to get along with,” Venturelli. “She’s just all around a good person.”

While Horbasch said she plays softball “24/7,” Schroeder also said she is a good student. Horbasch is majoring in Kinesiology so that she can become a pediatric physical therapist.

“I just love working with kids and I love helping people, so I thought that was a good way to do that,” Horbasch said.

Wilkin’s said that she sees Horbasch as being able to achieve her goals.

“She’s very well rounded,” Wilkins said. “She knows what she wants in life, and she’s willing to go through and get what she wants no matter what’s at stake.”

Schroeder concluded with saying that Horbasch is “the type of student athlete any coach at any level would love to have.

“She epitomizes what we want our student athletes to be,” Schroeder said. “She takes care of business academically, she’s a great teammate, she’s a great athlete, she works hard, she takes pitching lessons on the side when she’s not with our team.

“She kind of covers all aspects and that’s what you have to do if you want to be able to continue on at the next level.”