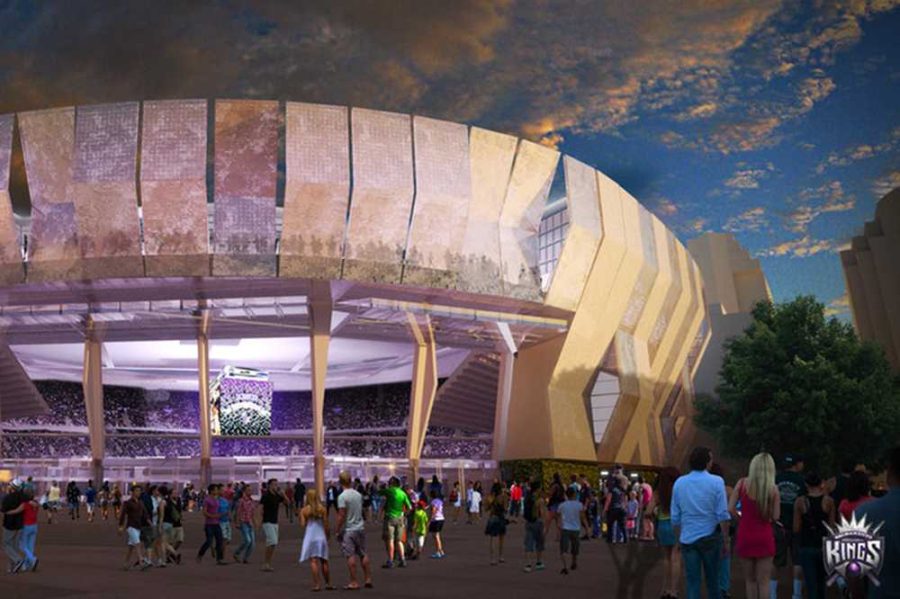 Secure in the fact that the Kings are to remain a Sacramento-based team under their new leadership, ownership unveiled the final renderings of the future new arena for the team on Jan. 28.

In 2013 the hard fought battle to keep the Kings in Sacramento was won when new team owner Vivek Ranadive, among others, bought the team from the Maloof Brothers. Part of the process of getting the team to stay in the city came from the work of Mayor Kevin Johnson and the city council and included plans for a brand new arena to be built in what is currently Downtown Plaza.

“When we bought the Sacramento Kings, we committed to the NBA and to the people of Sacramento that we wouldn’t just build a new arena, but that we’d build a world-class entertainment venue, an arena truly for the 21st century,” Ranadive said in a press release.

According to the same press release, the arena will have a grand entrance that measures 50 by 150 feet, multiple balconies, Farm-to-Fork programming and a skin that will reflect the “very fabric of Northern California.”

The new arena will be constructed with materials that range from glass to recycled aluminum to precast concrete that is composed of sand from San Benito, Calif. and rocks of Sierra limestone.

Gail Oliver, 18, a pre-med major said that the design is cool and that it looked nicer than the current arena.

“[The arena is] pretty cool. It might bring some attention back Downtown, and bring some more money in. Increase revenue,” said 18-year-old undeclared major Lamar Collier. “Last time I went to [Sleep Train] Arena was when I graduated. That one is simply outdated.”

Undeclared major Janie Myles, 21, said the designs were nice and they would draw more people in.

Others were not as sure about the new arena plans.

“I believe it has good intentions,”  said 19-year-old undeclared major Cezar Chavez. “I went to the mall today and I found out all the stores there are closing, [going] out of business. I talked to one of the workers there and he said he believes it’s for the best intentions. I believe if it’s to benefit the city as a whole then we should do it. Might be something we need to keep them [the Kings] here.”

Martin Galvan, a 20-year-old undeclared major, said something quite different.

“I think they’re doing too much, because they already have an arena,” said 20-year-old undeclared major Martin Galvan. “I think it’s a waste of money on something that is not needed. There are a lot of things that are needed. It looks pretty nice, it’ll be cool to see it, but at the same time it’s a waste of money when there is stuff out there that still needs help or to be rebuilt.”

While students are divided on the stadium and what it can mean for the city, Johnson said he knows just what it means.

“This is a glimpse not only into the new arena, but into the future of downtown Sacramento,” Johnson said in the press release. “I applaud the Kings and AECOM for developing a design that achieves so many goals: reactivating downtown, developing an iconic civic space, and promoting our emerging green and agricultural sectors. The extensive public outreach done by the Kings and City has paid off in a design that truly celebrates the best of our community’s great past and even brighter future.”

The arena is on schedule for ground breaking in the summer of 2014 and to be open for use in October 2016.