Hawks come out on top over Pirates in close-fought game 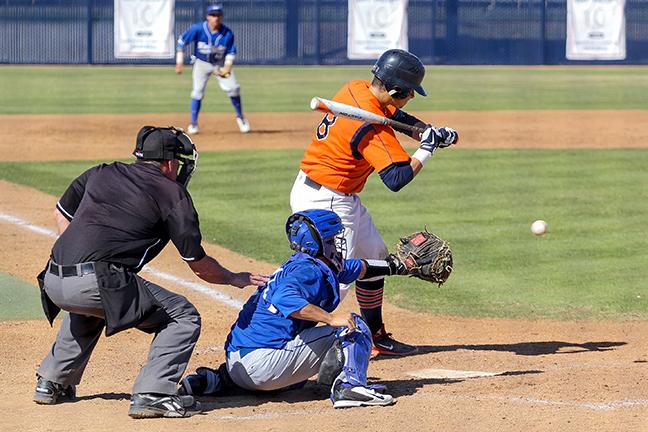 In a tense back and forth battle, the Cosumnes River Hawks baseball team narrowly triumphed over the Modesto Junior College Pirates 9-8 on March 20.

In the first inning the Pirates managed to score two runs, the first coming after an overthrown ball to first base by the Hawks. By the end of the second inning the score was 3-0 in the Pirates favor.

“At the beginning we didn’t execute, they scored two runs on one hit. We fumbled the ball at first base, we fumbled the ball at third base, our pitcher doesn’t have location so we got him out quick as we can,” said head coach Tony Bloomfield. “Being down 3 nothing, that guy had a 0.86 era coming in their starting pitcher so we knew it was going to be tough but we got to them and kept bailing back.”

The Hawks rallied back from the early lead of the Pirates when in the bottom of the third sophomore outfielder Kasey Chapan managed to successfully steal second and then reach third after a dropped pitch by the Pirates sophomore catcher Kevin Bettencourt.

A hit deep to left field by freshman infielder Drake Atlee gained him not only a single but an RBI as Chapan came home for the first run scored by the Hawks.

It wasn’t the last for the inning as another dropped pitch by Bettencourt brought sophomore outfielder Josh Cosio to third and Atlee to second, and a hit deep into center field by freshman first baseman Tyler Blake brought Cosio home.  The score was tied at 3 at the end of the third inning as a sacrifice bunt from sophomore infielder Hunter Carolan brought Atlee home.

“I think we did really well,” Cosio said. “We let them score early, but it was good that we battled back as a team and came back. Had to come back a few times, came back by three then we had to add on as we got runs we needed.”

After quick fourth innings for both teams, it was the fifth that brought the tie to an end as the Hawks took the lead that they kept for the rest of the game.

A double from a hit to right field that bounced off the wall by Atlee started the inning off. Atlee managed to steal third off another error by the Pirates catcher before a sacrifice fly by Carolan managed to bring Atlee home again, bringing the score to 4-3.

It would be a grounder along the right field line by sophomore catcher Cody Morris that brought the bigger lead as both Blake and freshman pitcher Zachary Mahon came home bringing the Hawks a 6-3 lead.

“The big hit by Morris with two outs and two strikes down the right field line, that was a big hit,” Bloomfield said. “It seems it’s a different guy each game for us, but we’re just trying to clean the game up and keep it simple as we can.”

Dropped balls plagued the visiting team again in the sixth inning allowing the Hawks to capitalize and gain another run in the inning.

“We were down early then we came back, and more and more events happened where the game was real close but we took out a slight lead,” said sophomore pitcher Joshua Pigg. “The team has basically found a way to win. So I think my team did really good today.”

The eighth inning for the Hawks brought runs as well as a single by Cosio followed by both Blake getting walked and Carolan getting beaned led to loaded bases. With the bases loaded the Hawks were in position to score again and they did as the Pirates pitcher managed to bean freshman outfielder Elway Santistevan which led to Cosio coming home bringing the Hawks lead to 8-6.

The Hawks last score came as Morris hit the ball deep to be caught, allowing Blake to come home bringing the Hawks runs to 9.

In the top of the ninth a home run by Pirates sophomore infielder Aaron Pangilinan brought the team two runs as it also brought sophomore outfielder Patrick Mulry home as well. It would be the final runs scored as the Hawks relief pitcher Chapan managed bring the game to an end leaving the score 9-8.

“Tuesdays game was flawless, we played great baseball on Tuesday,” Bloomfield said. “We came out today and it was an ugly game and we found a way to win. So that’s all you can do right now. We have to work on the fundamentals playing catch, throwing strikes and putting the ball in play.”