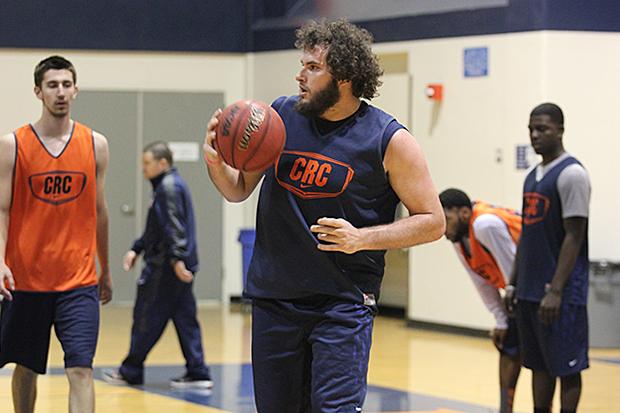 Hawks' sophomore center Jaycob Velasco stands amongst the rest of the men's basketball team in practice on March 4. The Hawks would lose to Fresno in the playoffs the following day.

A season of many ups and few downs culminated in a final playoff game for Cosumnes River College’s men’s basketball team.

That last playoff game, the Northern California Regional Semifinal, saw the Hawks fall to Fresno City College by a five-point deficit, with the final score sitting at 71-66.

“We lost in the Sweet 16 on the road at Fresno City by five,” said men’s head basketball coach James Giacomazzi. “It was a very close game, and I think it could have went either way. When you look at it from that aspect, it’s a tough one.”

The team’s season was hindered by injuries and unforeseen circumstances that reduced the team’s roster from 13 players to nine.

Despite the roster reductions, the Hawks came off a strong season, with 9-2 records both at home and on neutral ground and a 5-5 record in away games, with an overall record of 23-9.

Assistant men’s basketball coach Nicholas Podesta said he was happy with how the team’s season went.

“[It went] really well. Any time you win 23 games, and we were right in it for the conference championship until the last game of the season,” Podesta said. “Overall, great season, we were very pleased with how it went.”

Not quite as ecstatic with the loss fresh in his mind, Giacomazzi was nonetheless still happy with his team’s performance.

“I thought it went well, I mean obviously it’s tough when you lose, but everybody’s going to lose their last game except one team,” Giacomazzi said.

Giacomazzi was most pleased with the team’s improvement throughout the year.

Both Podesta and Giacomazzi noted that while the season “wasn’t just a one man show,” two players, sophomore center Jaycob Velasco and sophomore point guard AJ Bridges, were key to the season’s success.

Bridges, who was named First Team All-State, echoed the coaches’ sentiments about the season and said he thinks they “could have went a lot further, but [he’s] happy with what they did.”

As for next season, the coaches hope to exceed the accomplishments of this season and avoid losing players to injury.

“We recruit to have everybody have a role, a piece to the puzzle,” Giacomazzi said. “When those pieces start going away, we kind of lose a little bit from here and there. I think if we’re able to have some luck and keep the team intact as we’ve planned it, I think we would’ve been more successful potentially.”

Bridges’ performance this season resonated in his piece of advice to next season’s team.

“Keep the winning mindset and not settling,” Bridges said. “Make this a habit, don’t just let it be a one-time thing. Make it something that we consistently do, make winning a part of our program.”