Crowd sees pink and red in Hawks and Beavers doubleheader 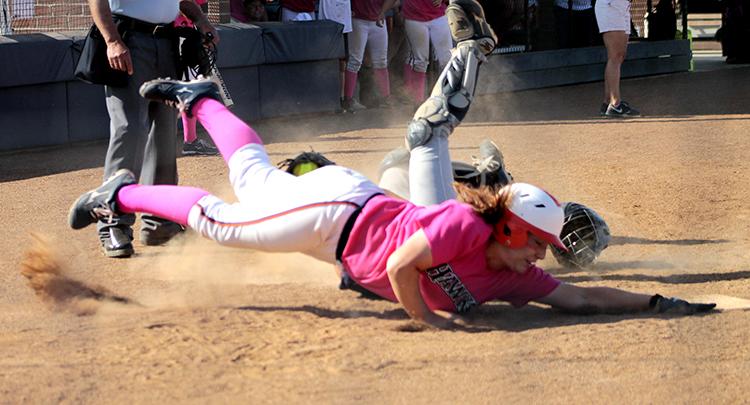 Sophomore outfielder Jessica Venturelli, in her pink uniform for the days breast cancer awareness drive, dives for home base in an attempt to tie the score against the American River College Beavers sophomore catcher Jordyn Bradley on April 19. Venturelli was called out, and the Hawks lost the second game of their double header against ARC, 5-4.

The Susan G. Koman foundation estimated that in 2014 over 40,000 women and 430 men will die from breast cancer related deaths. Jeanne Calamar, assistant athletic director at Cosumnes River College, is a three time survivor of breast cancer and is also one of the inspirations for the third annual breast cancer awareness game on April 19.

The Hawks donned pink uniforms to support breast cancer awareness, as volunteers sold raffle tickets to fans with every dollar made to be donated to breast cancer research.

“We actually have someone in our department, Jeanne Calamar an assistant athletic director and also a faculty member on campus that struggled with breast cancer and she’s doing better now, so that’s one of the reasons,” said Hawks head coach Kristy Schroeder. “It’s [also] nice to do the Play Pink and give to a cure cause. So that’s why we do that.”

Much like the battle against cancer, the Hawks battled on the field as they took on the American River Beavers.

Controversial calls by the umpires, against both teams, became a running concern throughout both games of the double header.

A continually growing and shrinking strike zone became the clearest issue, when one moment a pitch would be a ball only for the next pitch at the same exact spot to be considered a strike.

The crowds mood through the two games changed greatly as the umpires would call players out or safe, causing the crowd to erupt in jeers and comments as they readily disagreed. A favorite of which seemed to be asking if the umpire, or blue as the crowd referred to them, was blind.

“I think we battled back really well, I mean it was a tough game,” said freshman pitcher Amanda Horbasch. “I know the umpires were not a good excuse, I think we need to hit earlier, but I think we did a good job overall.”

While the Hawks ultimately lost both games, 2-1 for the first and 5-4 in the second, they managed to keep it close both times.

In game one both teams came out strong scoring a run in their first inning, only for defense to strengthen up keeping both teams from scoring anything until in the sixth inning the Beavers freshman infielder Ranaya Baugh sent a ball deep into center field bringing freshman infielder Lolli Conway home after the Hawks freshman outfielder Jessika Wilkins dropped the ball.

Much like the first game it would be the sixth inning that changed everything, as the tie of one run each was broken as with two outs on the board, the Beavers managed to rally back and score four runs before the Hawks ended the inning by catching freshman third baseman Brittni Hodge stealing second.

“We could have played better defense in this game, we had way too many errors that kept runners on or gave them a couple extra bases so that was tough, but I liked the way they fought at the end,” Schroeder said.

That would be the last time the Beavers scored any runs, and it seemed that there would be none for the Hawks either but the seventh inning changed the game once more.

With all on the line, the Hawks came out and loaded the bases leading three runs of their own bringing their score to four, with a possible tying run ready to bring the game into extra innings. It would be sophomore outfielder Jessica Venturelli that tried to bring the tie as she ran home in a race against the ball as the Beavers tried to get it to the catcher.

Unfortunately the tie was not to come as Venturelli ran into Bradley before home plate, after the Beavers catcher had the ball, and the umpire called an out much to the anger and disappointment of the crowd as they erupted.

“I thought we stayed up till the finish so I was glad to see that, it was just a shame how it ended,” Schroeder said. “We just haven’t gotten much our way. It seems like every close game we’ve gotten ousted by something odd that you would think could have gone either way.”

Much of the game rode on the shoulders of both teams pitchers as Horbasch and the Beavers sophomore pitcher Stephanie Mitoma pitched for the entire fourteen innings of play.

Horbasch said that she was used to pitching two games in a row and that “it’s almost easy, I just have to keep pushing through throwing the best that I can.”

“I thought Amanda pitched very well, she did a great job on the mound and I liked our fight at the end,” Schroeder said. “We really came up, and did everything that we could do at the end to try and win we didn’t give up on that. Which that was great. If we could play like that the whole game that would be awesome.”

Amidst the controversy of the officiating and the battle on the field, the breast cancer awareness game managed to bring in $143, said 26-year-old history major Heather Martin who was one of the volunteers. Martin said that $70 came from the raffle and $73 was donations, with winners of the raffle getting to choose from items like t-shirts with the CRC logo or headbands.