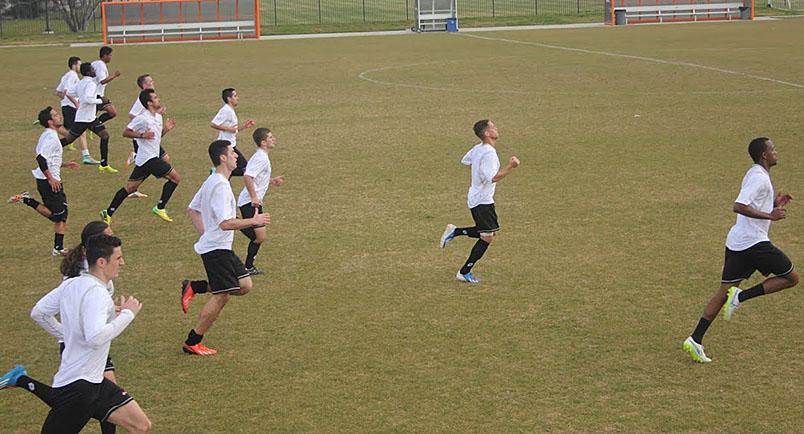 Sacramento Republic FC players jogging during their practice on Feb. 2.

Last season the Republic used the new soccer fields at CRC for their inaugural season since they had no facility of their own at the time, while also using facilities at Sacramento City College. While their stadium was completed last summer, the team is once again making use of the campus fields.

“It’s a great facility, [with] two nice fields,” said the Republic head coach Predrag Radosavljevic. “[There are] people who take care of us. We really enjoy the time we have.”

Moving into their own facilities last June, Bonney Field at Cal Expo, the Republic went on to win the USL Pro Championship in their first season by defeating the Harrisburg City Islanders 2-0.

Athletic Director Liz Belyea said there are many benefits to having the championship team return to CRC.

“[It’s] definitely good for our department and college to have the Republic here,” Belyea said. “It helps [with] recruiting, college visibility in the community and community relations.”

Republic forward Thomas Stewart said that the facilities help them get away from everything, since they’re removed from the city center. The location was not the only benefits, as Stewart said their quality was beneficial as well.

“There are good facilities here, probably one of the better ones [around],” Stewart said. “It’s [also] handy for all the boys. I think all the boys live within a 15 minute drive, so it’s handy for everyone really.”

Emrah Klimenta, a defender for the team, agreed about the quality of the facilities and the convenience.

“I think the pitch is nice, and it’s convenient as the lockers are right there and it has a treatment room,” Klimenta said. “It’s just a nice pitch, that’s all we care about.”

While Klimenta said that the pitch is nice, he said that their own facilities offer the fact that they are home and that it’s nice to have their own stadium.

While the team’s training days are scheduled from Feb. 2 to Feb. 6, before they head to Fresno to take on the Fresno Fuego FC, Stewart said that they will be back on CRC’s pitch this season.

“I think we’re back back and forth, we’re back here all week and then we’re down to Ventura for another five days of intense training and games,” Stewart said. “And then we’ll be here throughout the season I’m pretty sure.”