Hawks split the difference in doubleheader with Butte College 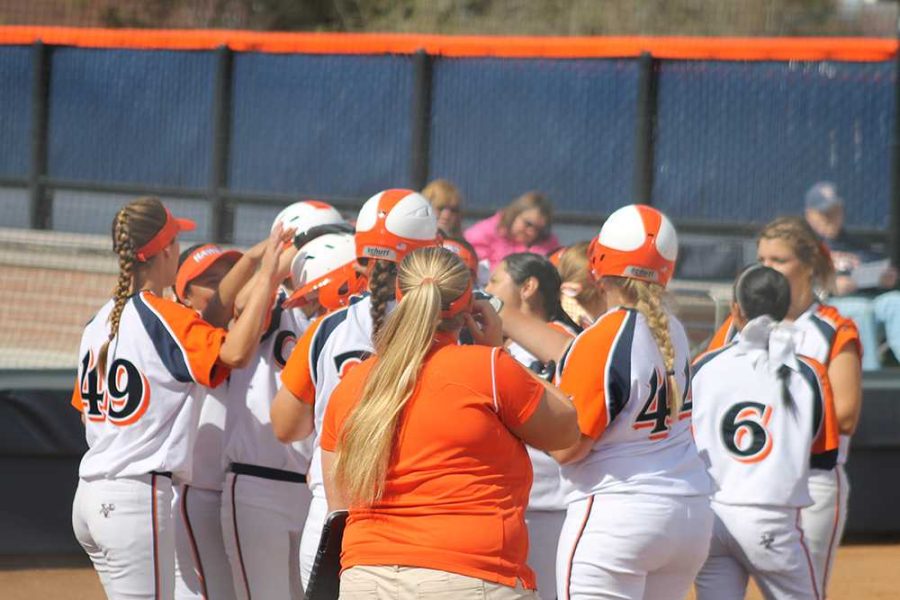 Hawks players celebrate at home plate and pat the helmet of sophomore utility Hanna Miller after Miller's first inning home run brought them an early lead in game one against Butte College.

The possibility of forecasted rain and thunderstorms didn’t sway the women of the Cosumnes River College and Butte College softball teams as they faced off in the last doubleheader game before CRC enters conference play.

With a record of 9-5-1 before the double matches, the Hawks looked to keep the strong start to their 2015 season going. A strong start that has included multiple shutouts, one of which was also a no-hitter for sophomore pitcher Amanda Horbasch.

After quickly shutting down the Roadrunners in inning one with three quick outs, the Hawks put themselves on the scoreboard after a deep hit into left field by freshman catcher Raechel Hopper resulted in two runs batted in as freshman second baseman Kaitlin Pires and sophomore outfielder Christin Stein came home.

Their first inning run tally didn’t end there as a home run by sophomore utility Hanna Miller brought the Hawks an early 4-0 lead going into the second inning.

“I think we did really well [today],” said sophomore catcher Carly Hintz. “At the beginning of the game we were talking about how important it is to play with our hearts this game and really go at it 100 percent and I think we definitely did that, and it definitely showed.”

In the third inning the Hawks lead was cut in half as a double RBI by the Roadrunners brought the visiting team their first two runs of the game. Quick to answer back, the Hawks increased the lead in the bottom of the third after an RBI single by freshman shortstop Brenda Velasquez and after freshman outfielder Daniela Media stole home and scored off an overthrown ball, Hawks leading 6-2 at the end of the third.

“We stayed up the whole time, and I think we really believed in ourselves and our teammates,” Hintz said. “There’s never a doubt, never a person that goes up to the plate that you don’t think is going to do what it takes to win a game.”

Unable to score in either the fourth or fifth innings, the Hawks saw their lead slowly chipped away as the Roadrunners managed to score a single run in both innings, bringing the score to 6-4 in the Hawks favor.

Miller gained gained another RBI as a hit into left field brought Pires home and brought the score to 7-4. In the seventh inning the game changed for both teams.

With two players already on base, the Roadrunners managed to load the bases after the umpire deemed that Butte sophomore outfielder Kelsey Haigh was hit by a pitch. With that call, which was contested by Hawks head coach Kristy Schroeder, the Roadrunners started a rally that led to them taking the lead 8-7 by the end of the inning.

“I think we did well, we were always positive and never let the other team take advantage of us,” Horbasch said. “When we did get behind we battled back. We stayed strong. I think we could have hit our cuts a little better and just make our routine plays we need to make.”

In the end the Hawks battled back and won the first match as an in the park home run and RBI by Velasquez brought the score to 9-8.

Overall Schroeder said she was happy with the game’s outcome.

“We came to the plate great today, I mean we obviously scored nine runs, we continued to have good at bats and run the bases well and do what we needed to do by ourselves,” Schroeder said. “Offensively I’m extremely happy because we never let up.”

On the defensive end, Schroeder said there issues but in the end they came back strong.

“Defensively we had a couple mishaps, and errors that kind of let them get on. Amanda struggled a little bit with walking and stuff, I mean I don’t think she hit the kid at the end there. So that kills ya,” Schroeder said. “You have some calls that go against you or little bloopers or whatever and things kind of get out of hand. So it was scary to get to that position but I love the way that our team saw it and did a really nice job to come back.”

Game two of the doubleheader started off strong for the Hawks much like the first, as a fly ball out to right field by Miller brought home Horbasch and Stein, giving the Hawks an early 2-0 lead in the first inning.

Innings two through four became a defensive battle between the two teams, no runs being scored for either team till a wild pitch in the top of the fourth gave the Roadrunners their first run of the game and another wild pitch in the bottom of the fourth allowed Medina to steal third before being sent home by Velasquez, bringing the score to 3-1 in the Hawks favor.

Two more runs were scored by the Roadrunners in the top of the fifth to tie up the game, before the Hawks answered back with a two run home run by freshman pitcher Christy Satterlee to regain the lead, 5-3.

By the top of the seventh inning the Roadrunners tied the game up again, 5-5, and the Hawks were unable to bring anyone home in the bottom of the seventh, leading to extra innings.

It was Butte freshman outfielder Sammi Minter that sealed the end of the game in the top of the eighth as she hit a double that brought home sophomore infielder Taylor Peters. The Hawks were unable to score in the bottom of the eighth, seeing only four batters at plate in the inning, leading to a 6-5 loss for the second match of the day.

“I think we just need more quality at bats,” Hintz said. “I think overall we did really good, but just trying to get runners to score when we have runners on base in scoring position, not leave them hanging.”

Satterlee said that their defense worked well but the hitting of the other team came alive, and that there is one area they need to work on for the next game when it comes to hitting.

“I think staying on top of the ball when we’re up to hit so we don’t fly up [so that] we hit more line drives and grounders,” Satterlee said.

Schroeder said that she felt that the team had all the effort and attitude they needed as well as good defense and that she liked how hard the team played, but there were areas to improve going forward.

“I think the pitcher’s gotta bear down a little bit more. We can’t give up that many runs and I don’t think we had too many errors out there in that second game,” Schroeder said. “I felt comfortable with our pitching staff, I just think it wasn’t our day on the mound as far as that goes because we don’t usually give up that many runs and we gave up quite a few today.”