Hawks softball tie for first in Big 8 after defeating Beavers 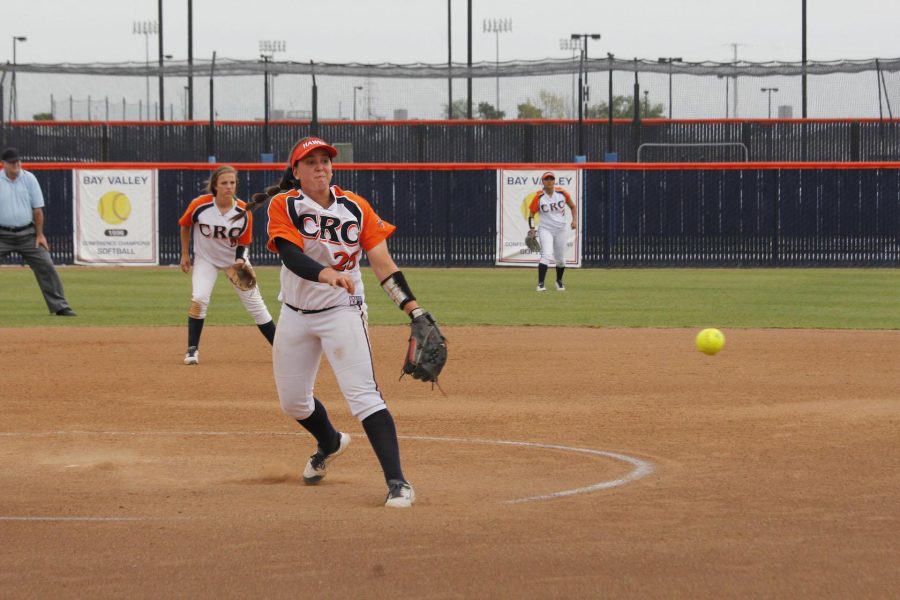 Already six games into conference play, the Cosumnes River College Hawks softball team was able to maintain their dominance on the field as they took on the American River College Beavers in a doubleheader at home on March 20.

Coming into the game with conference standings of 5-1 and an overall season standing of 15-7-1, the Hawks ended the day at 7-1 and 17-7-1 as they defeated the Beavers in both matches.

“I think everyone all around is doing a really nice job,” said head coach Kristy Schroeder. “We have a full team effort, even the ones who are coming in to pinch run and just taking care of things on the side it’s a full team effort so its been real fun.”

Game one between both Los Rios teams started off with ARC’s freshman outfielder Gabriela Segura hitting an RBI double that gave her team an early lead in the first inning. In the bottom of the first, the Hawks answered back as freshman catcher Raechel Hopper hit a two-run home run that brought the teams to a tie as the inning ended.

Hitting a home run not only changed the game’s score, but was something that Hopper said felt really good.

“Oh my god it feels amazing. It’s the best feeling in life,” Hopper said. “You just feel this huge weight lifted off your shoulders.”

Neither team scored again until the third inning when ARC freshman catcher Jennifer Woo hit a homerun to give the Beavers the lead, 3-2. Once again the Hawks battled back in their half of the inning, as sophomore utility Hanna Miller sent a ball into left field for an RBI double that brought home Hopper and sophomore pitcher Amanda Horbasch, bringing the score to 4-3.

The Hawks didn’t finish there though. Sophomore first baseman Briana Cherry hit an RBI single that brought Miller home and gave the Hawks a 5-3 lead.

“I thought we did awesome,” Cherry said. “Our batting was amazing, our defense was good, we had a couple of errors but nothing we couldn’t come back from.”

Cherry said that she thought the team did an all around good job but that communication is one place they can continue to improve on.

Neither team scroed in the remaining innings, as the rest of the first game became a defensive battle that left the Hawks with their 5-3 lead for the win.

While the Hawks won, Horbasch said there was an area they could improve in going forward.

“[We need to] keep hitting solid contact instead of popping up every once in a while,” Horbasch said. “Just more solid contact, but I think other than that we did a great job.”

In game two things started off just as big as Woo hit another home run, this time a three-run home run that brought ARC a 3-0 lead in the top of the first. A sacrifice fly to left field by Horbasch brought the Hawks a single run by second baseman Kaitlin Pires in the bottom of the first.

“I feel we did awesome,” said freshman pitcher Christy Satterlee. “I think we played as a team and we worked really good, kept the cheers up and we didn’t make a lot of errors.”

A defensive game started up for both teams until the sixth inning when the Hawks were unleashed, scoring six runs that sealed their victory. Their runs included a two-run home run by Horbasch and an error that allowed freshman pitcher Olivia Dibble to steal home and score.

The Hawks performed well at bat as they came up one after another and kept advancing  from base to base. Their dominant performance in the sixth led to a seventh inning where they finished ARC off without letting them add another run to the board.

“We hit good ball. I mean anytime you can score nine runs against a team you feel pretty good about that,” Schroeder said. “We are hitting the ball well our middle line-up really came through with some big home runs, and you gotta love those because you don’t have to worry about running the bases in that situation.”

Overall Schroeder said the game was good, but there are a few things to work on.

“We popped up a little bit [too many times], but i think we made the adjustments and did a really good job,” Schroeder said. “I think that our pitchers calmed down in both games and they did a good job adjusting. So i think we’re making the adjustments we need to make.”

Schroeder said that how the team handles mistakes has improved.

“I felt pretty good about today because we are not making the same mistakes over and over again,” Schroeder said. “When we do make a mistake the next time we have a situation thats similar we’re not making that again. We are doing something different and putting the ball in play, and I was really happy with today.”