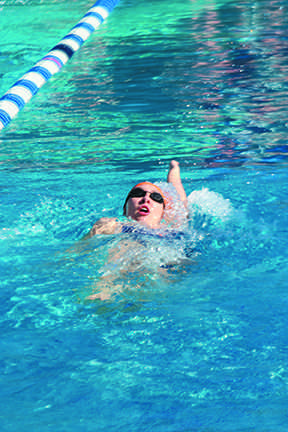 A swimmer for Cosumnes River College’s women’s team diving into the pool during their team relay at the Big 8 Invitational at American River College on March 13.

Cosumnes River College’s female athletes were given an opportunity this season to be on the ground floor of an entirely new program as the campus added women’s swimming to their list of sports.

Part of being a new program means there are things the team has to deal with that a more established program might not have to. While they began recruiting last semester when the program was first approved, the team only has five swimmers and most of them do not have swim competition experience.

Another obstacle the team must face is that while CRC has a pool and facilities for them to practice in, they can’t compete at home. All of their meets have been on the road.

Despite all these limitations, head coach Liz Abrams said their season is going very well.

“So far it’s going remarkably well,” Abrams said. “Granted we do have a small team, but one of the benefits to that is they are getting a lot of one on one direct attention and practices will be tailored to what specifically they need. It’s a really special opportunity to have such a small close knit group and environment.”

Abrams said that they are hoping to grow the team but are appreciating the time that they have to be able to build a solid core. Assistant coach Andrew Sieger said he agreed.

“We are building this program from the ground up and its amazing to have members who have never swam competitively be interested and join our team,” Sieger said.

In order to bring a swim team to the campus, Athletic Director Liz Belyea said that they just had to switch some of the budget around in order to fund the team and hire coaches.

“Having a swim team meets the needs of the surrounding community,” Belyea said. “There are many swim programs in the area and female swimmers will be able to have the opportunity to swim competitively.”

Besides providing a space for local female swimmers a place to swim competitively, Belyea said there are other ways having a swim team benefits the campus.

“The use of our pool facility by our students is also increased,” Belyea said. “Having this team helps us to meet Title IX requirements.”

Title IX is the U.S. Department of Education guidelines and rules for equality in various areas of education, including athletics. In reference to sports, Title IX states that ““a recipient which operates or sponsors interscholastic, intercollegiate, club or intramural athletics shall provide equal athletic opportunity for members of both sexes,” according to the U.S. Department of Education.”

Basically it means that there needs to be an equal opportunity for the same amount of men and women to play sports. The loss of the women’s tennis team this season left an opening for a new sport to take it’s place without having to make shifts on the men’s side to make sure that opportunities stayed equal.

Besides just giving more opportunities to female athletes in the community, having a bigger team would help them in being able to score more points at their meets Abrams said.

During their meets there are different events, everything from to the 200 meter freestyle relay, that swimmers can participate in. Multiple swimmers from a team can compete in these events and they are broken up into heats, which are groups of swimmers that compete at the same time in the given event.

Times and where swimmers placed are compiled for each heat and then the results are posted after all heats of the event are completed.

“So your goal would be to place first, second or third and depending where you place you are allotted points for your places,” Abrams said. “So the more swimmers you have to place in those top events the more points you score. So it behooves you to have a lot of swimmers because it gives you more opportunities to score more points.”

Choosing who to let swim in each event depends on a few things Abrams said. Swimmers that have swam before tend to “have preferred events or events they’ve trained for in the past or that they’re more naturally good at,” Abrams said.

When it comes to the CRC team she said that it comes down to not only what events the women might prefer or be more natural at but also their times. Abrams said that they try to put the swimmers who are faster at certain types of swimming into those events in order to up their chances that they’ll place and score higher.

During the preparation last semester there was an entirely different head coach handling the building of the program.

Abrams said she was called in as the coach very shortly before the season began.

Sieger said he has his eyes set on the future as well.

“I feel we are setting the groundwork for seasons to come,” Sieger said. “As a team we have improved and the rate of our improvements are helping set the state for what this program can be.”

Like Belyea and Abrams, Sieger said he hopes to tap into the local community more going forward.

“We have a lot of talented swimmers in the area,” Sieger said. “And now with another opportunity for them to compete, that is in its early stages, we have a chance to make something great here at CRC.”