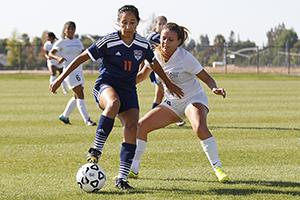 Just over 40 years ago, 37 words were passed into law that changed the world of college sports forever.

“No person in the United States shall, on the basis of sex, be excluded from participation in, be denied the benefits of, or be subjected to discrimination under any educational program or activity receiving Federal financial assistance,” according to Title IX of the Education Amendment of 1972.

After its passing, colleges were required by law to adjust their sports programs to allow for equal athletic opportunities for women and men as well as equal facilities. This requirement is a main reason that Cosumnes River College is home to five different women’s teams.

“It gave equal educational opportunity to women in all aspects,” said head softball coach Kristy Schroeder. “There’s a lot more scholarships, and all of these schools have huge facilities. If you look at our facilities, it’s one of the nicest in the state and we would not have that if it wasn’t for Title IX.”

Kinesiology Professor Cheri LaDue, who was previously the softball coach, said that the law also pushed women’s sports into the mainstream.

“It put pressure on the schools to open up and funnel some money towards women’s sports, which then opened the eyes of the public and that’s when you saw women’s sports really grow,” LaDue said. “Women’s teams like Baylor [University] and UCLA filled their stadiums. As a matter of fact, I went to Baylor, and for a number of years the women were outdrawing the men.”

Women’s soccer head coach Cesar Plasencia said that while there are differences in coaching women’s and men’s teams, he enjoys them both.

“Whenever someone asks me what it’s like coaching women, I always tell them first and foremost, I coach soccer,” Plasencia said. “[Coaching men’s and women’s teams] both have their challenges and rewards.”

Both Schroeder and women’s basketball head coach Coral Sage said that playing college sports got them to where they are today.

“It was my vehicle to pay for my education,” Sage said. “There was no way I could have paid for college without playing sports. But it also gave me a purpose and direction and taught me about life and responsibilities.”

With March being Women’s History Month, the topic of how women’s programs came about is an especially timely subject.

“It’s always important to look back at your history and know where you come from and how far you’ve come,” Sage said. “Even in my program, I tell every team we have to know the history behind why you’re here.”

Schroeder said that women who play sports at the college level are inspiring the next generation of women athletes.

Sage, who wrote her master’s thesis on the effects of playing sports at a young age and how it impacts the rest of your life, said that knowing young girls like her daughter are looking up to players on her team is always in the back of her mind.

“Now I have my daughter and she’s with me quite a bit and comes to practice,” Sage said. “I know my daughter is watching them and I maybe don’t want someone on the team that I don’t want her looking up to.”

Schroeder said that learning to be competitive through sports is a good skill to have.

“Being competitive is an advantage to have in everything in your life and so to play a sport growing up gives you a competitive edge against people who don’t do that because in the business world that’s what you do everyday,” Schroeder said.

Freshman swimmer Seanna Estes said that playing sports has more than one benefit.

“Our self esteem can come from anything, but the important thing about playing a sport is that it’s a personal achievement and you’re getting fit and that makes you feel good about yourself,” Estes said.

“It gives self-confidence and you get to build relationships,” Plasencia said. “It teaches you how to deal with group settings and at the intercollegiate level it’s that much more magnified.”

Schroeder said that while CRC has done a good job at implementing Title IX through the years with women’s teams, coache, and female athletic directors, some other colleges aren’t as lucky.

“There are some colleges and universities that still don’t provide things equally to women and men,” Schroeder said. “At CRC we are lucky. Today, I don’t think the girls see it as much because they have the things that the guys have. ”

“Some of the athletes do take it for granted that things have always been like this and just because something is here now does not mean it’s going to be here in 20 years or that it was here 20 years ago,” LaDue said.

Schroeder said that the Title IX creators deserve more credit than they get.

“The people who created Title IX probably don’t get as much credit as they should for making all of these changes, but we are lucky that they did,” Schroeder said.