Men’s soccer looks to improve over the offseason, coach says 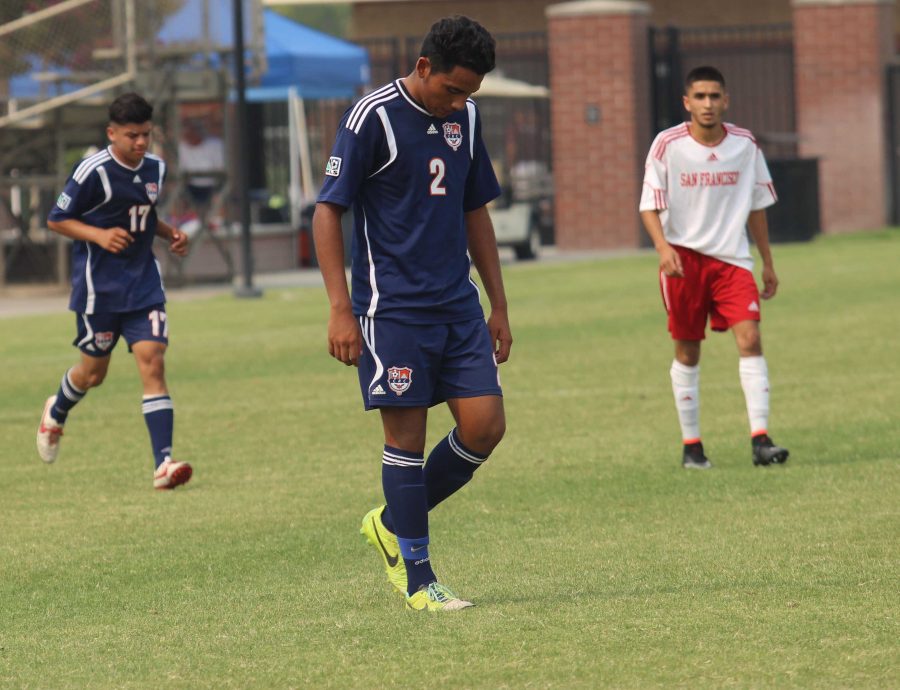 Defender Jose Alvarez walks, center, across the field with teammate midfielder Juan Ramirez following a 3-1 loss to San Francisco City College on Sept. 13. The Hawks went on to struggle the rest of the season only earning two wins out of the 20 games they played. Head Coach Ron Preble said that a lack of experience among the team led to the disapointing season.

Kinahan’s words summarize the disappointing 2015 season record of the Hawks men’s soccer team and the character of a young and talented group of athletes who continue to believe in themselves despite their 2-14-4 record.

“We should be able to bounce back,” said Hawks freshman midfielder and defender Jacob Schanning.

Hawks men’s soccer head coach Ron Preble is optimistic about the future of his team.

“The group was young this season and played the game well but lacked the finishing touches required to get the results we were looking for this season,” Preble said. “The freshman class is large and we expect that they will come back better if they wish to make our 2016 squad.”

During the off-season, Preble expects his young athletes to remain committed, focused and to get into the weight room to get stronger.

“Our philosophy is that we want the ball with the end result of running the legs out of the other team and creating a goal scoring chance on each possession,” Preble said.

Hawks sophomore defender José Torres, who won’t be around next season because he’s transferring, thought that trying new and different formations may improve the Hawk’s chances of winning.

Preble and his coaching staff agree that the team’s low winning percentage was due to inexperience. He has identified areas to improve that should increase the total number of wins next season.

The speed and endurance training is an area players will need to work on.

“We need to be stronger and have more matches in the matchbox to do a better job competing for next season,” Preble said. “The difference for us on the season was the lack of the final pass and the finishing.”

Although the Hawks are losing four sophomore athletes, two due to transfers, Preble has identified student athletes to recruit but is tightlipped about their identities.

“This year we are looking for attacking personalities that can score,” Preble said.

Preble also revealed that student athletes who weren’t on his radar have contacted him about playing for the     soccer team.