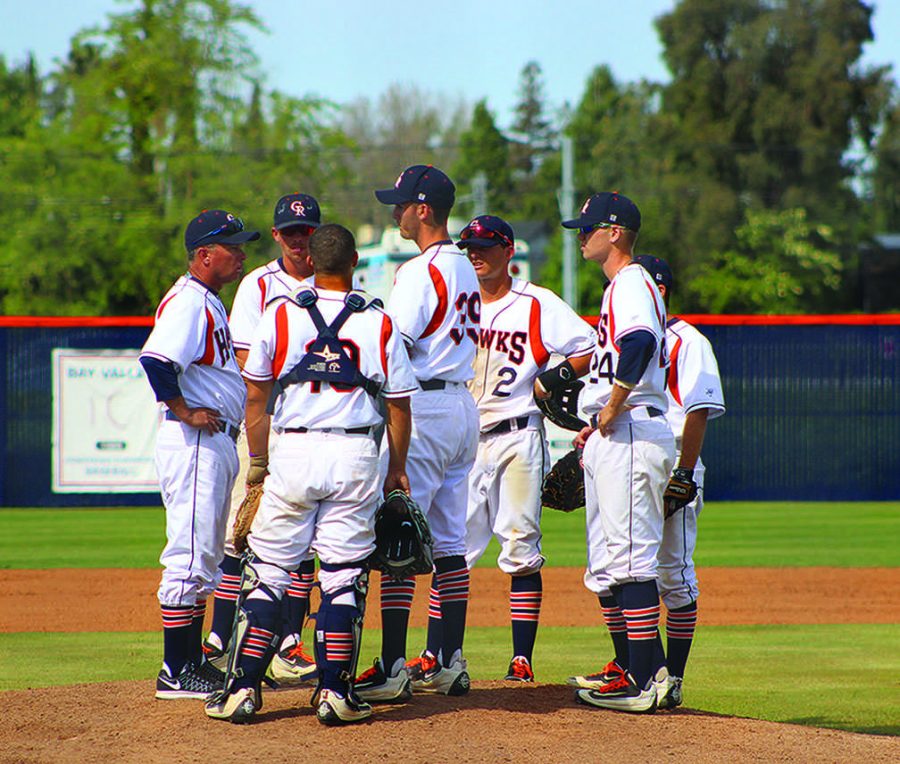 Heading into the final month of the season, the baseball team is in good position to finish strong. Sitting at 20-6, the Hawks now face a critical stretch of conference games.

The team started the season 12-0 and was ranked No.1 in Northern California by the California Community College Baseball Coaches Association. But it hit a rough patch between March 8-22, losing five of six games.

After going from 12-0 to 14-6, the Hawks have bounced back with six straight wins. The team likes where they’re heading in the final month of the regular season.

“Well we’re in good shape. We are starting to play better, have played really well early in the year, went through a slump there for a week and a half of not playing or pitching real well,” head coach Tony Bloomfield said.

“I think we are playing pretty good baseball right now and I think we’ll play our best baseball at the end of the year like we always do,” he said.

Pitching has been critical in the Hawks’ last four wins, with the pitchers allowing just three runs across 36 innings.

“I always usually take the first strike and try and see as many pitches as I can,” Pettengill said. “Try to help guys out in the dugout, see off-speed (pitches) and stuff like that.”

“In my book, a walk is just as good because you’re getting on base anyways. I’m just really waiting for that one pitch that (the pitcher) makes a mistake on that I can hit,” he said.

Pettengill’s ability to get on base consistently has helped set the table for some of the Hawks’ leaders in RBIs. Sophomore center fielder Andre Gregory’s 31 RBIs this season is tied for third amongst Northern California junior colleges.

Freshman outfielder Jordan Yu is second on the team and ninth in Northern California with 25 RBIs for the season and freshman shortstop Brett Bloomfield has 23.

Gregory, who will play baseball for the University of New Mexico next season, said he will miss the Hawks coaching staff and his teammates.

“Definitely the great coaching staff, all the things they taught us,” Gregory said. “Not only about baseball but about life and outside of the field. Just the team bonding, the great teammates, guys you’ll have as friends for the rest of your life.”

The Hawks came into the season with plenty of experience, the team is made up of players in their second year at CRC and players who transferred over from four-year colleges, but they continue to improve their game mentally.

“Understanding what the guy is probably going to throw me, how to run bases better, how to play second base and outfield more, because those are two positions I’ve never really played before,” Pettengill said.

Pettengill’s comments were echoed by Gregory, who said the coaching staff has made it a focus for players to slow things down and be able to process everything going on.

“Learning the game, learning how to slow it down. One of (Bloomfield) coach’s things is just trying to slow the game down and become a better mental player and that will help you later on,” he said.

“I think we’ve played better defense consistently, now the fields will get harder and faster so we’ll find out,” Bloomfield said. “I think the pitching has finally come around, I think we’ve set roles for guys now, we used a lot of guys early and guys now know where they fit in and what their roles are on the staff.”

The team remains locked in with the Big 8 Conference on the line and a chance at the playoffs at stake.

“Every game is a playoff game, that’s why you’re in the Big 8. If you don’t bring your A-game, you’re gonna lose. We want to play the best teams and that’s what we do,” Bloomfield said.