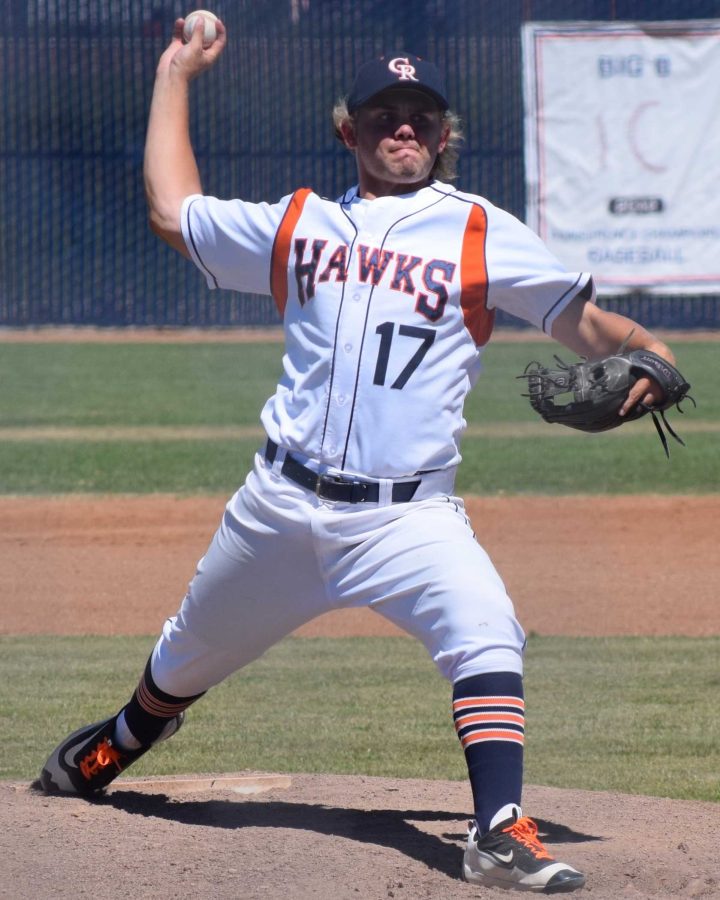 In a playoff-deciding game against College of San Mateo, Cosumnes River College came through in game three with a 8-4 win, advancing to the second round of the Northern California super regionals.

The Hawks jumped out to an early lead, but saw it slip away in the fifth inning. As they’ve done all season, the team responded right back with runs of their own.

“We’ve done that all year. When teams score, we seem to respond and score right back after,” said head coach Tony Bloomfield.

Left fielder Chris Loeb got Cosumnes River on the scoreboard early, driving in right fielder Jordan Yu on a fielder’s choice with the bases loaded in the first inning. Catcher Nicco Toni followed it up with an RBI single to give the Hawks a 2-0 lead.

Pitcher Jeremy Caldwell started for the Hawks in game three and early on, delivered much of the same results as he did in his last start against Marin College. After allowing no hits over five innings in his last start, Caldwell pitched 3 ⅔ innings of no-hit ball on Sunday.

Caldwell gave up a one-out walk in the fourth inning, then his first hit of the game two at batters later, but he escaped the jam to keep the shutout going.

In the fifth, Caldwell hit the leadoff batter then gave up a walk and was pulled from the game with runners on first and second with no outs. Pitcher Cameron Keup took over and picked up a strikeout, but then surrendered two runs after back-to-back singles and an error.

With the game now tied, the Hawks responded quickly. Theys loaded the bases thanks to a leadoff walk and a hit by pitch and walk with one out in the inning. First baseman Brian Morley broke the 2-2 tie with a sacrifice fly, then Yu scored from third on a wild pitch.

Pitcher Chris Loeb took the mound in the sixth with a two-run lead, but things unraveled quickly. After the Bulldogs opened the inning with a single, Loeb allowed an RBI double to cut the Hawks’ lead to 4-3.

After Loeb loaded the bases with no outs in the inning, pitcher Matt Stafford took over after starting just two days ago. Hawks shortstop Brett Bloomfield snared a line drive up the middle and tagged second to record the double play, holding the runners at first and second.

“Bases loaded, so that’s a key situation in the game, we were only up by one, so it was a big stop right there,” Stafford said.

Stafford then produced a groundout to end the inning and escape the bases-loaded jam with a 4-3 lead in tact.

Cosumnes River broke the game open in the bottom of the sixth, thanks to another bases-loaded situation. Designated hitter Robert Daugherty drew a bases-loaded walk to make it a 5-3 lead, then Morley lined a two-run single up the middle to widen the gap.

“Just in that situation, bases loaded. I knew that I had to get a base hit,” Morley said. “It was huge. It broke it open by four runs, think it was huge for me and my team.”

Stafford helped himself out as well, lining a single under the first baseman’s glove to drive in Daugherty and give the Hawks a 8-3 lead.

“That was great. Add another run on, just an extra run, just in case they score more, we still had plenty to work with,” said Stafford.

With a five-run lead, Stafford silenced the Bulldogs’ lineup over the next two innings. Over three innings of work in relief, he allowed just one base runner and struck out three.

Yu took over on the mound for the ninth inning, and allowed three baserunners to reach and a run to score, then generated a groundout to end the inning and seal the win.

The Hawks will have another week to practice before they take on San Joaquin Delta College in a best-of-three playoff series on May 20-22.