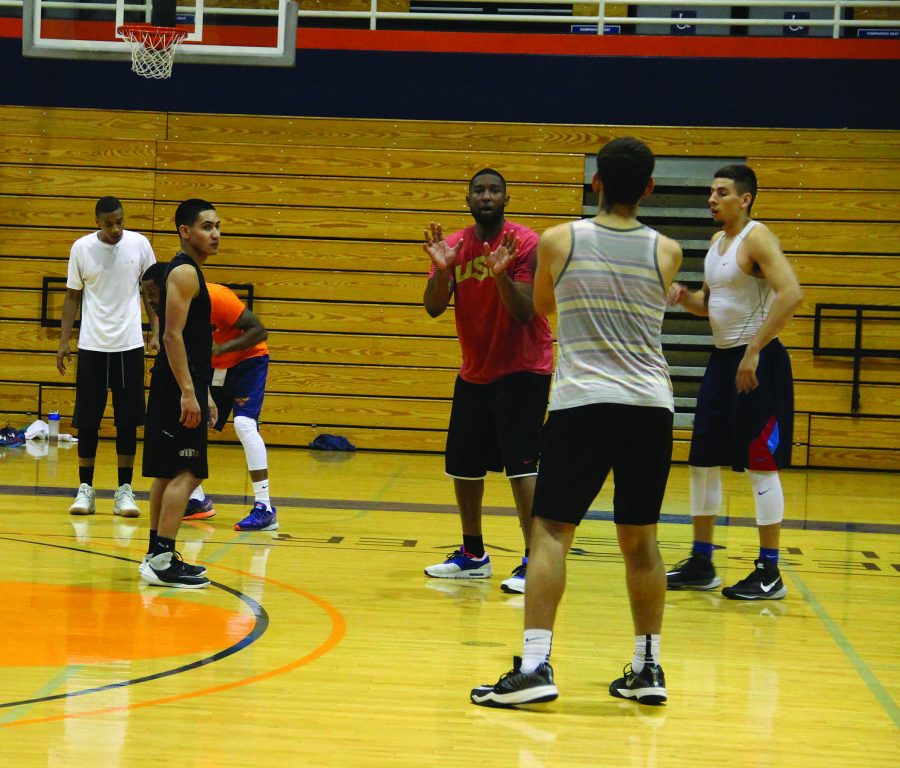 It’s not often a coach has the opportunity to return to his alma mater and go full circle, but that’s exactly the case with new men’s basketball coach Jonathan James.

James, who played at Cosumnes River College under Hall of Fame coach James Clark, now returns to the same court as a head coach in his first college head coaching job.

“It’s home to me, it’s home. When you have an opportunity to come home, it’s a different feeling,” James said.

The road from and back to CRC helped mold the way he coaches now and how he made it this far. James was coached by Clark at CRC and then Hall of Fame coach Ed Murphy at University of West Georgia, whom like many other of James’ coaches focused on connecting with players.

“All my coaches, they really wanted to develop that relationship with the players and he was definitely one of those guys,” James said. “So I kinda adopted that mindset, that philosophy, once I became a coach.”

James experience on the court carried him from CRC to University of West Georgia then overseas, where he played basketball for several seasons.

During James’s time outside the U.S., he said he learned a great deal about how to adapt to different situations. “That’s so important, especially when you’re playing overseas, you kinda have to take things as they come,” James said.

“You have to be willing to bend a little bit, you have to get outside your norm from time to time. It may be uncomfortable in the moment, but it helps you grow as a person and as a player.”

It’s the experience, both at the four-year level and abroad, that players are glad to have.

“It gives me a lot of confidence in his ability to teach me how to be not only a good player, but a good human being off the court,” he said.

Not only does James’s experience as a player and coach help these players and build them into better players and men, he can also teach and show them what it took to play at the next level.

“It’s good to have a coach that has played at the four-year level and overseas because he knows what it takes to get there. It’s definitely a positive impact,” said sophomore guard Trevor Hooper.

After six years as an assistant under Giacommazi, Jones now had the opportunity to become a head coach, at his alma mater no less, and Giacommazi backed him all the way.

“He was super excited for me. He was one of my biggest supporters through this whole process and he believed in me,” James said.  “When you have a guy with his reputation, just as a person and in the coaching world, when he kinda gives you that stamp of approval, it’s an eye-opener.”

James’s return to CRC and his local roots is also something players appreciate, especially for Lintz.

“It’s really nice. I knew Coach James before he became the coach a little bit and for him to become the coach, it’s kinda like we had that special connection that we had built off the court,” Lintz said.

James is focused on preparing his players for the next level, with a system that is similar to the four-year level with coaches for each position.

“I think you’re able to really hone in on deficiencies and so you can spend more time with a smaller group of guys and correcting these things ,” James said. “I think it helps the kids develop quicker,” he said.

But his main focus is on academics and seeing his players being well-rounded with the ability to bring that same focus from the court into the classroom.

“We know they want to go out there and play basketball, but we have to get them to put as much effort, energy and enthusiasm into the academic side of things,” James said.

James is focused on getting the team active in the community by bringing everyone together.

“My goal is to really get the community involved with CRC. Whether we increase enrollment or we increase attendance to events, not just sporting events, but various events on campus,” James said.

“I think I have an opportunity to bridge the gap from CRC as an institution of higher learning and then the community, there is so many programs and resources that CRC offers,” he said.

James brings in a three-man assistant coaching staff, who will work with specific positions and bring experience from the four-year level.

Tony Champion, who was previously an assistant coach at Christian Brothers High School and has experience playing at the four-year level from his time at Sacramento State, will coach the Hawks’ big men.

He’ll be joined by Matthew Bradley, who returns for his second stint as an assistant at CRC after he formerly served on Giacomazzi’s staff in 2012.

It’s Bradley’s 17th season as a basketball coach, much of it spent locally.

Bradley will assist James with on-floor coaching, in addition to his duties planning practices and recruiting.

Jerist Roberts, who also played at the four-year level and most recently was an assistant coach at Kennedy High School, will also be part of the staff.

With the season just a few months away, coaches and players have used this time to prepare for the coming season on the court and learning his new system.

But even more importantly, building this team into a family who is always there to support each other through the ups and downs.

“We have to believe in ourselves. We are responsible for our success, both athletically and academically, it’s all on us,” James said.

The team’s first game is on Nov.10 in the Chabot College tournament.