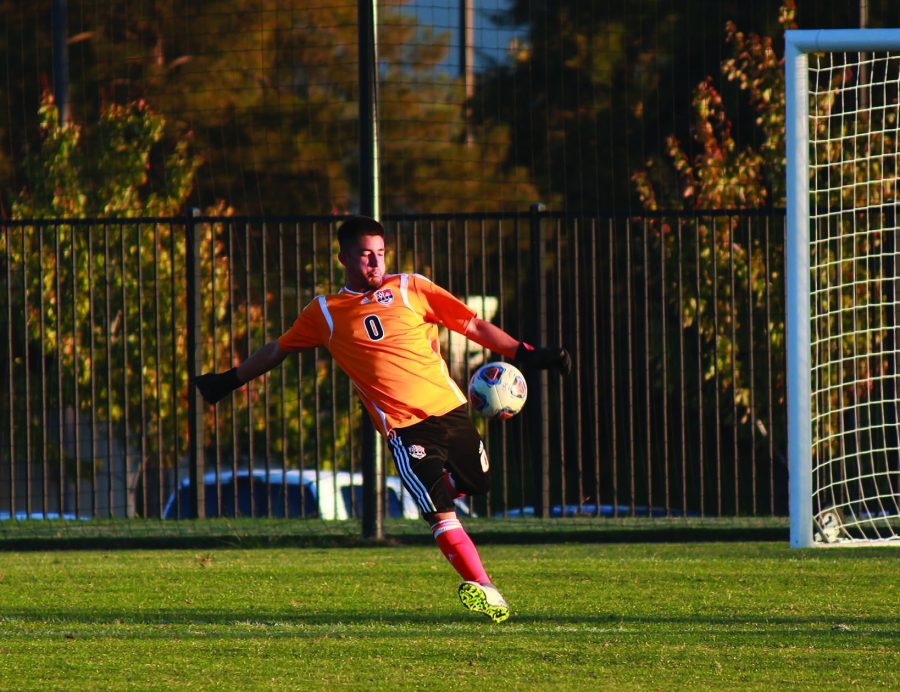 Cosumnes River College stayed in control throughout a physical game on Friday against West Hills College Lemoore. The Hawks brought extra intensity and emerged victorious in their 4-1 win over the Golden Eagles.

It was a battle throughout that saw both teams on the score sheet for several violations. Five yellow cards were handed out during the game, including four in the second half, and 28 total fouls were called.

Given the Hawks’ recent struggles in more physical matches, it’s something head coach Ron Preble said he liked to see.

“We’ve been in a couple physical matches over the last two to three matches and we actually haven’t been physical enough,” Preble said. “So that might be a response to the opponents that we played and the coaches imploring upon our players to be a little more on the physical side.”

“We were a little soft in the previous three matches, so we felt like we had to have a little more mettle to our game,” he said.

The teams were at a stalemate for the first few minutes as they adjusted to each other’s games until they found what worked for them.

Then 10 minutes into the game, the Hawks broke through when freshman midfielder Efrain Serrano Jr. got the ball in stride and struck it home for his first college goal and an early 1-0 lead for his team.

“It felt good to be on the scoresheet and to help the team get a win. It’s a feeling that I can’t really describe, I could relive it another 1,000 times, it’s a great feeling,” Serrano said.

Serrano’s first college goal was also a nice moment for Preble, who said the freshman’s work ethic and maturity makes him easy to root for.

“He’s been one that’s been working hard, he’s a good teammate, he is mature beyond his years, the way I see him. Anytime you see a kid like that have success, you’re always pulling for him,” Preble said.

The Hawks held onto the one-goal lead for much of the first half, with some solid defensive play and impressive goaltending by freshman goalie Antonio Welch.

But Cosumnes River wasn’t done yet as sophomore defender/forward Bryan Gonzalez drove home his second goal of the season and pushed the team out to a 2-0 lead.

The intensity carried on into the game and presented the Hawks with another scoring opportunity late in the first half. Sophomore midfielder Eric Figueroa converted the penalty kick to give his team a 3-0 lead, which they carried into halftime.

With teammates providing him plenty of support on the scoreboard and on the field, Welch did his part with a strong game between the goal posts. Throughout the game, Welch made multiple diving stops to take away potential goals and preserve the Hawks lead.

“It felt great. It’s just a good confidence booster, being able to make some top-shelf saves like that.

It just feels great in the moment and it just gives myself and the team a whole bunch of energy to feed off of,” Welch said.

Welch and the Hawks shut out the Golden Eagles for 80 minutes until sophomore forward Salvador Contreras drilled a shot right into the top corner of the goal, to cut the Hawks lead to 3-1.

But just 90 seconds later, sophomore forward Jesus Cota knocked it in from a few feet out to give the Hawks the 4-1 lead and finish things off.

CRC [7-7-2] will resume conference play at home next Friday against Modesto Junior College [2-8-6].