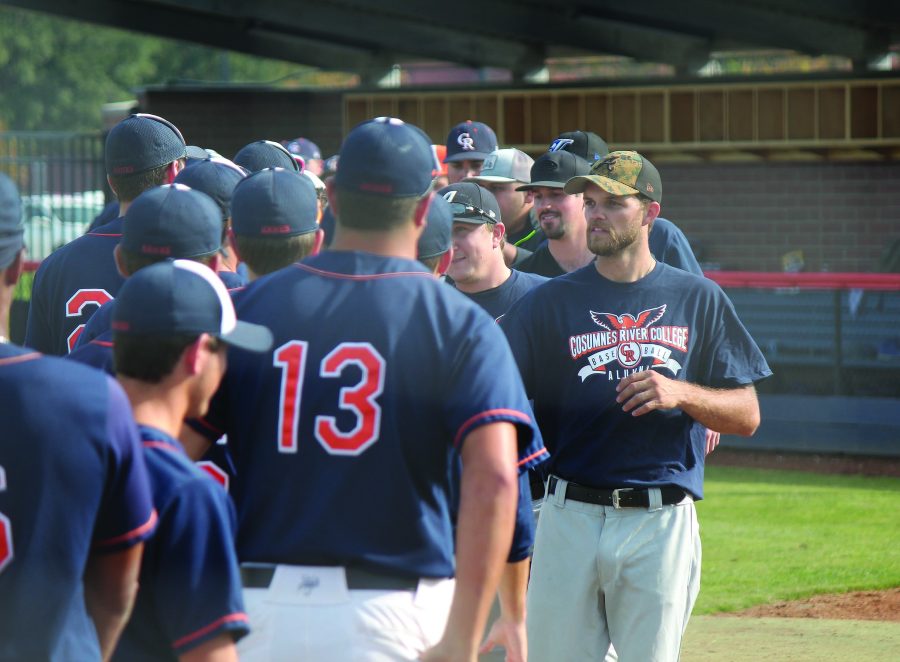 It was a competitive reunion.

The Cosumnes River College baseball team has spent much of the fall training, scrimmaging and preparing for next season. After competing against each other so much, the team faced a fun opponent on Nov. 5

The Hawks hosted their third annual alumni game at Conway Field in a matchup between players from the upcoming 2016-2017 team against baseball alumni from CRC.

The game provided many alumni the chance to catch up with old friends and coaches before they laced on the cleats, put on their gloves and took the field.

“Bloomy always provides a great atmosphere. It’s awesome, it’s phenomenal to be able to come back,” said second baseman Michael Chavarria, who played under head coach Tony Bloomfield at CRC in the 2013-2014 season.

“Just to have so much fun, like we never left pretty much,” he said.

The game also provided a nice opportunity for older players who played at CRC to see the new changes made to the facilities.

“It’s really nice to see the new field they have, the facilities have gotten a lot better and it’s nice to come back and see the coaches and the program flourishing,” said right fielder Evan Zimny, who played for the Hawks in the 2005-2006 season.

While there was certainly rust after time away from swinging the bats against live pitching, alumni players were still pleased with how they performed.

“I felt good. It’s been forever since I have swung,” Chavarria said.

“I thought I felt better than how I thought I was going to be swinging it. It was fun, that’s all that matters pretty much.”

The alumni fell behind early as the Hawks jumped out to an early 1-0 lead on a fielder’s choice that scored a run from third. While the alumni missed out on an inning-ending double play when the throw went wide of first base.

The Hawks held onto that lead, though it didn’t come without some scares.

In the top of the third, the alumni loaded the bases with two outs in the inning and an opportunity to tie or take the lead, but a strikeout stranded the runners.

Hits with runners in scoring position never came for any of the alumni, but they did come just a few feet from tying it up later in the game.

“Well, I almost knocked one out of the park, that was a pretty good moment. But I was just a few feet short. I’m gonna be thinking about that one until next year,” said catcher Cody Morris, who played at CRC during the 2013-2014 season.

The Hawks tacked on an additional run in the eighth inning on a sacrifice fly, giving the alumni one last inning to try and get back in it.

They stranded tying runner at the plate when a double play ended the game and gave the 2016-2017 Hawks the 2-0 victory.

While the alumni didn’t walk away with the win, the opportunity to see old teammates and friends made it all worth it.

“Just being out with all the guys who have been a part of the program and organization that Bloomy has put on pretty much. He’s a phenomenal guy. Bloomfield is the man,” Chavarria said.