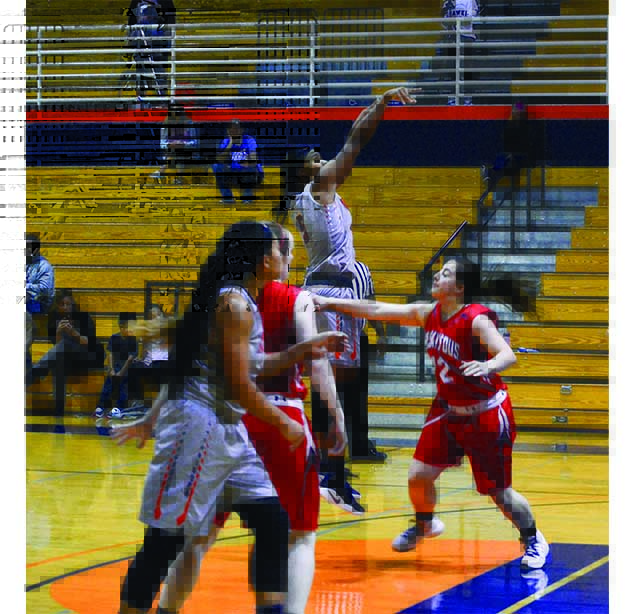 The Hawks opened the season with a tough loss on Monday as the College of Siskiyous dropped them in a 100-53 contest.

For the second time in three years, Cosumnes River College’s women’s basketball team opened the season against the Eagles and the Hawks met a similar fate once again.

While it was a tough loss for the team, head coach Coral Sage was still pleased with the hustle and effort her team showed.

“The fight the girls had,” Sage said. “They just kept playing the whole time, which is what we always talk about.”

Even as the Eagles continued to build on its lead as the game went on, players said they felt good about the work they put in and how they never game up.

“I feel like we played hard. I feel like we didn’t let down even though they got ahead of more than we wanted it to be,” said sophomore forward Daija Ward.

Monday’s game was the first game back for redshirt sophomore forward Akila Britton, who retured to the court after she tore her labrum and ankle ligaments in the team’s third game of the year last season.

In her first game back, Britton contributed three rebounds, she also found herself in some foul trouble with four fouls on the night.

Siskiyous dominated from start to finish, jumping out to an early 24-6 lead and they never let CRC cut the deficit below 20 points after that.

The Hawks surrendered 100 points on the night, running into issues with rotations, leaving Eagles’ shooters open for threes and struggling to play transition defense.

It’s something Sage knows the team must improve on and will adjust to given their unique defensive system.

“Because of the type of defense we run, it’s just unorthodox, our rotations need to be better,” Sage said.

“We’re getting too many people on the ball instead of one person on the ball and then everyone rotating.”

Players also saw areas where they could improve defensively so they can keep things close and smooth going forward.

“Defensively, just being in the gaps and being more aware of where my teammates are,” said sophomore guard Gina Ingravallo.

While the Hawks had to play catch up for most of the game, they made several trips to the free throw line, attempting 24 free-throw attempts on the night.

“That’s something I want to do. Get to the foul line and knock down free throws, get those easy buckets,” Ward said.

“We just have to work on executing and just keep fighting. We’re really excited for the tournament because we think it’s a good chance to bounce back from this game,” Ingravallo said.

The Hawks next game will come in the three-day tournament hosted by CRC. The tournament will feature some of the top-15 ranked junior college teams in the state by the California Community College Women’s Basketball Coaches Association’s preseason rankings.

Their first game will be at 1 p.m. against Butte College.