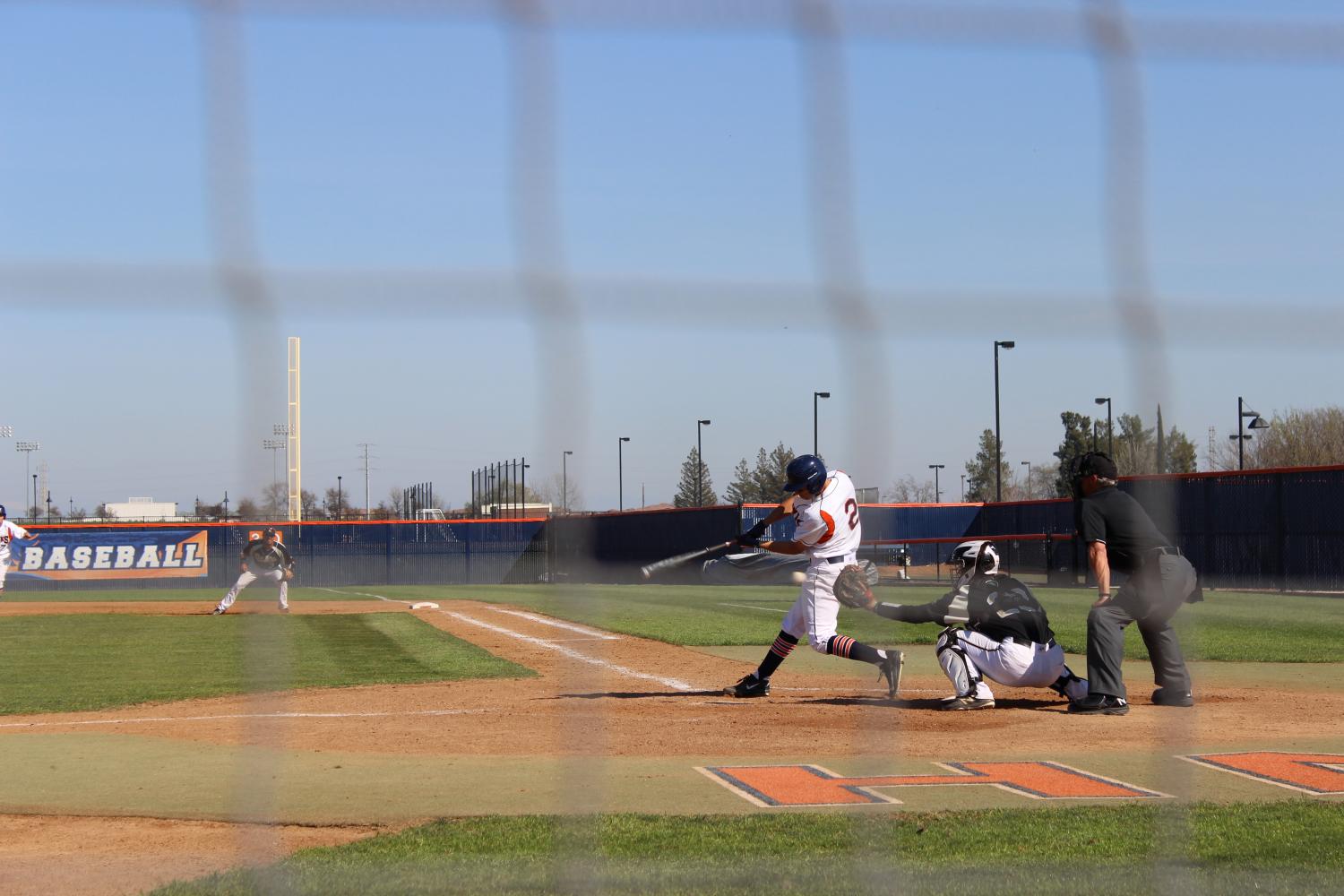 Sophomore shortstop Brett Bloomfield strikes out in the bottom of the third inning, leaving the Hawks at 9-1.

In a heartbreaking loss, the Cosumnes River College men’s baseball team came up short against the San Joaquin Delta Mustangs with a final score of 14-6. This game put an end to the Hawks’ nine-game winning streak.

The game was mostly one-sided, with the Hawks struggling to score runs. Head Coach Tony Bloomfield said that the Hawks need to stand their ground moving forward this season.

“We have to compete better,” Bloomfield said. “We can’t have big innings.”

The game was in the Mustangs favor from early on with the team having nine runs by the end of the second inning, while the Hawks had none. This proved to be devastating for the Hawks, who had trouble scoring for the rest of the game.

Multiple pitching changes were made in the first few innings. Sophomore pitcher Anthony Castaneda started and was replaced in the second inning by sophomore pitcher Lucas Still. After another few runs were scored by the Mustangs, Still was replaced by freshman pitcher Daniel Vitoria, who was able to retire the side.

“I just kept telling myself, ‘The team needs me right now,’” Vitoria said. “I just had to get outs.” Vitoria pitched until the seventh inning when he was replaced by freshman pitcher Donovan Harrison.

In the bottom of the third, a single by freshman catcher John Treat allowed freshman infielder Damien Chavez to score a run, the first for the Hawks in this game.

“It’s always nice to try to set the tempo,” Chavez said. “We really needed it.” The Hawks weren’t able to score anymore in the third, ending the inning two strikeouts later and leaving two men on base.

The Hawks scored again in the bottom of the fourth. Near the end of fourth, Chavez hit a single. An error by the third baseman allowed sophomore infielder Brooks Day to to leave second base and make a dash for home. In an incredibly close call, Day made a headfirst dive and was called safe at home, scoring the second run for the Hawks and bringing the score to 10-3

“It was actually Coach [Don] Mico who sent me. I thought about scoring the whole time,” Day said. “We took the gamble, and it paid off for us.”

The bottom of the ninth was the Hawks’ most productive inning at bat. After a fly out to start, Treat followed with a walk to first. A single and a strikeout left the Hawks with two outs and two men on base. The next hit was a single, which allowed Treat to score a run. Another walk and a fly ball by Day to right center got two more runs on the board for the Hawks. Sadly for the Hawks, Day was out at second base on the next play, ending the game.

Day said that, while the loss was disappointing, he is confident in the team’s ability to win moving forward.