Volleyball team aiming to be midpack in Post’s second season 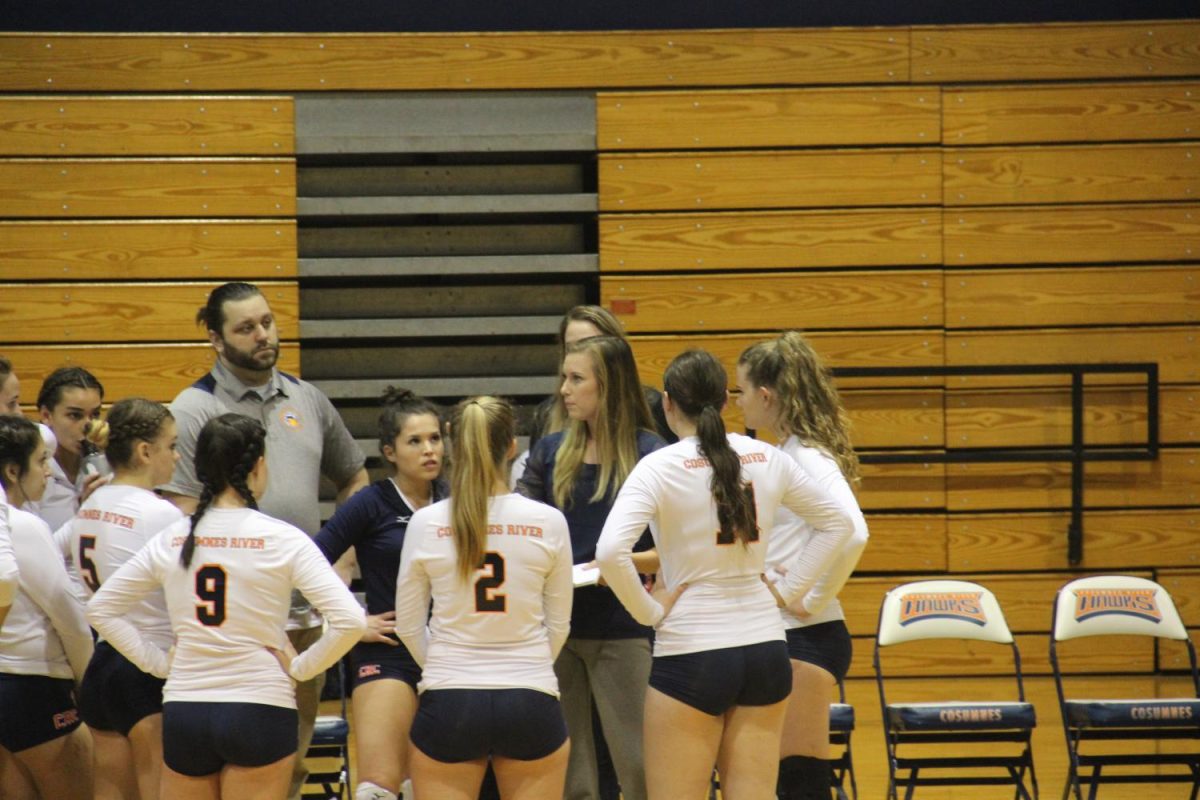 Volleyball head coach Kari Post huddles with her team during the Hawks' game against Modesto on Sept. 15.

As she moves into her second year as the volleyball head coach, Kari Post is hoping to take her team all the way.

Coming off of 66 conference match losses in a row, Post was glad to win the last home match against Modesto last season and break that record.

“We broke that record and won, which was really awesome,” Post said.

Post went on by saying that the most important part for her in being the coach of a community college team is getting to see the players transfer to a four-year college.

“We had everybody else graduate, and they’re all at four years, which is the biggest part of being on a community college team, is mostly to move us on to the four-year level,” Post said, “academically, athletically, however we can, and it was great to actually move on every single sophomore that we had.” Post said.

Post said that the goals for the past year have been to never give up and to make sure the team came to win. Post also said that for the coming season, she wants to set high goals for the team.

“This season, we’re going to try to be midpack,” Post said, “which means we want to be like fourth, fifth, sixth, maybe even seventh in our conference.”

The volleyball team at Cosumnes River College underwent a massive change in its roster, from last season being a predominantly sophomore-led team to this season’s almost entirely freshman team. Post mentioned that her goals have changed as a result.

“This year our goals are, ‘We want to be a contender in conference,’” Post said.

Player growth was another big goal for Post in getting ready for this season. She said she wanted the team to work hard at everything they do.

“The biggest thing for me is work ethic,” Post said. “That’s the biggest thing I tell them: working hard is the number one thing, and then obviously attitude and the other things that come along with that.”

Members of the team, like freshman setter Sierra Voyvodich, talked about their experience with Post as a coach.

“She’s really like strict, but in a really helpful way,” said Voyvodich. “She makes me feel together, like we’re one big family.”

Sophomore defensive specialist Maya Young also talked about her experience with Post, citing Post’s knowledge and expertise of the game.

“As a player, she knows every position, so she’ll pick you apart, like to the most basic things,” Young said. “Stuff you’ve been doing your entire life, she’ll change.” Young also spoke to Post’s dedication to the team.

“I like how dedicated she is,” Young said. “She’s one of the most hard-working people I know.”

Post said that she wants to be a good personal influence on the players in addition to being their coach.

“I want to make sure that the girls to know that they have a good role model to look up to, and be able to have someone that is going to be there for them no matter what,” Post said.

Post said that her personal coaching philosophy is something that her team hears from her all the time.

“Work hard, push as hard as you can and start being comfortable uncomfortable,” Post said.

Post said that if nothing else, she wants for her players to move on to a four year and for the team to be known as the hardest-working team.

“We’re going to be the team that never stops fighting until the very end,” Post said.