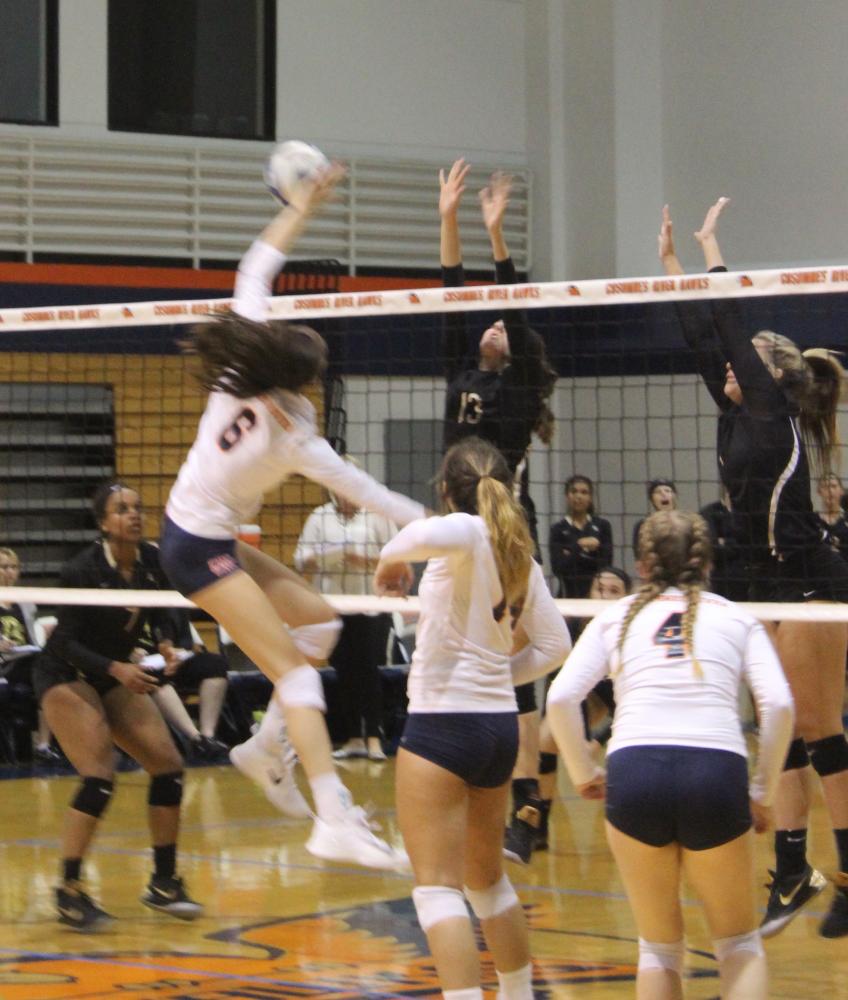 The Hawks faced the San Joaquin Delta Mustangs on Friday, another rival in their division. It was a fight to the end, but the Mustangs swept the Hawks in three sets.

“Another top team that we were ready for, and I was hoping that we would improve our offense and blocking specifically for this game,” Hulsey said.

The Hawks had two players on the injury reserve: freshman outside hitter Kelsey Brehm had a concussion and opposite hitter Madison Jayne had a broken wrist.

Despite their absence on the court, the Hawks were focused and ready to play against the Mustangs.

In the first game set, the Mustangs performed well on offense and defense, and their blocking was persistent, for which they won 25-5. It was a blowout, but defense for the Hawks was improving, which gave them the momentum going into the next game set.

As the second set began, the Hawks defense started to pick up more, but the offense was still struggling. Sophomore defensive specialist Maya Young expressed her thoughts on coming into the second set.

“We came out with a lot of energy, and we were working on our communication, and that made us come together as a team,” Young said.

The Mustangs took the second set 25-11, and the Hawks were still struggling with their offense and blocking, leading the Mustangs to score more points.

The Hawks kept battling and were making a few defensive stops in the second set. Coming into the final set, it was a back and forth competition, making the last set very interesting.

The Hawks made the Mustangs fight for this set, and point after point, the momentum was on the Hawks’ side. Clumsy mistakes from the Mustangs gave the Hawks the lead 11-7 and forced the Mustangs to take their first timeout.

In the end, the Hawks fell to the Mustangs 25-18, a close one, yet it was something for the team to talk over for the next game.

The Hawks kept fighting till the end, and sophomore defensive specialist Justine Busse expressed her thoughts of the aftermath.

“We didn’t beat each other up, and we finally figured out consistency is the sparks of brilliance, so I’m proud of our team,” Busse said. “Our communication was improving, and that third set should have belonged to us, but Delta made good shots, so I’m not mad.”

Turley had one final thought concerning the game.

“I’m proud of them for not quitting each other, and that made them to go out and play,” Turley said. “So, our game plan for the next game is to focus on movement, blocking, swinging, and offensively, because when we’re out there we come together, and not take everything literally.”