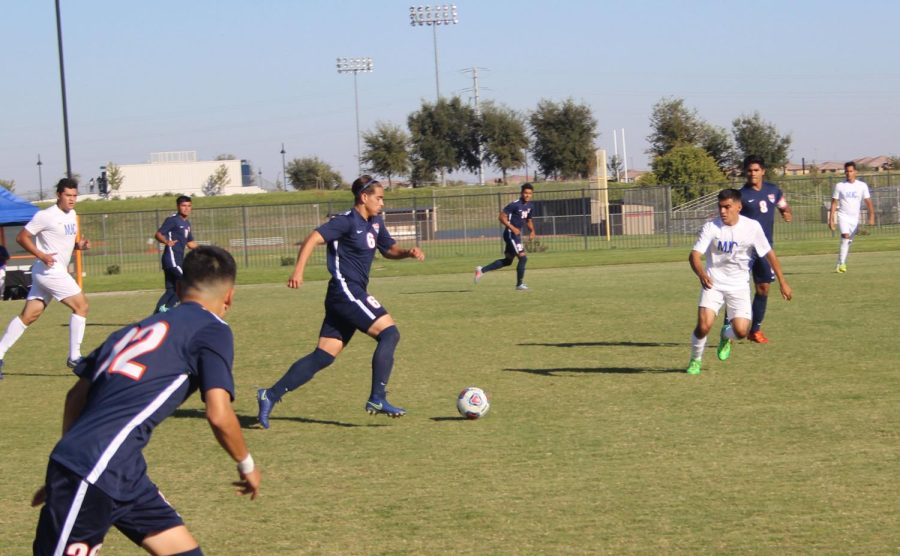 The men’s soccer team cruised to a two game winning streak at their home game against Modesto on Oct. 6. a back and forth game leading to a 2-1 victory for the Hawks.

In the first 30 minutes of the game, Cosumnes River College and Modesto were going at it left and right. Modesto showed a strong defense causing CRC to have trouble getting to the goal. Close to the end of the first half, forward Andrew Covert was brought in as a substitute and scored almost immediately.

Defensive and forward player Dylan Mello had a lot to say about what the team needed.

“We as a team, we needed to start winning,” said Mello. “This game was definitely a turning point.”

Modesto was very aggressive after the first goal that was scored on them. After Covert gave the Hawks a 1-0 lead, the Hawks ended the first half scoring another goal by forward Christopher Reveles for a lead of 2-0 for the Hawks.

“It gave us a little bit more confidence,” Mello said.

Forward player Kevin Medina was happy to win, but hopes to not start slow next time.

“We were off to a slow start, so we knew we had to pick it up,” Medina said.

Modesto started off the second half surprisingly strong and scored a few minutes in, making it 2-1.

Throughout the remainder of the game, it was a back-and-forth battle. The Hawks ended up showing how strong their defense was and took a win for their home game.

Head Coach Ron Preble said he knew this was going to be a competitive game.

“It was a dogfight,” Preble said. “It was a good opportunity to get on a winning track.”

Preble said he almost thought his team was letting Modesto back in the game.

“I felt like we controlled the game for 65-70 minutes,” Preble said. “We got a little ‘Helter

In the end, Preble praised his goalkeeper and defenders for keeping at a 2-1 score for the Hawks.

The Hawks’ next home game will be against Clovis Community College on Friday at 4 p.m.