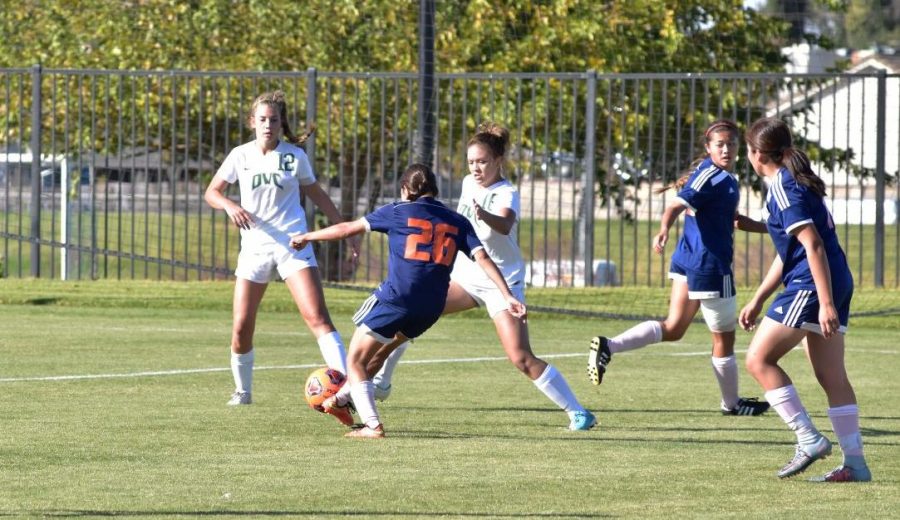 Freshman player Renata Montanez tries to maintain control of the ball in the Hawks' game against the Diablo Valley Vikings on Friday.

The women’s soccer team took a hard loss to the Diablo Valley Vikings on Oct. 13. Throughout the match, Diablo Valley kept control of the ball, leading to a 3-1 defeat for Cosumnes River College.

Freshman forward Sydney Pierce said she liked how the team played and gave her thoughts on what should be practiced for a better outcome during the next game.

“We are probably just going to practice our shooting skills and practice more of our passes,” Pierce said. “We did really good; we played with a lot of intensity today.”

The Hawks struggled throughout the first half while being held to their own half of the field for the majority of the first 45 minutes.

While being limited to their own half of the field during the first half, the Hawks conceded three goals which resulted in a 3-0 score at the half.

The second half of the game did not seem to get much better for the Hawks as they were still unable to move the ball efficiently for the majority of the half.

Despite the lack of pressure that the Hawks were able to apply, a well timed pass towards the closing minutes led to a powerful shot by freshman forward Alexis Brown that rocketed past the goalie and into the back of the net.

“I should have had three more right before that,” Brown said. “A lot of our players are hurt, so that’s basically a really big downfall.”

The Hawks showed great heart and character despite the tough defeat. They never gave up or hung their heads; every player played through that final whistle and gave it their all until the very end.

Head Coach Cesar Plasencia was pleased with his team’s attitude throughout the entire game.

“I loved the spirit with which my team played with,” Plasencia said.

Plasencia said that his team will work on all of the basics as well as some things that he saw on the field today. Fundamentals are a very key part of practice, if players can execute things in practice then players are expected to execute them on the field on game day.

“We’ve got to be sharper in front of the goal and defend a little bit better,” Plasencia said.