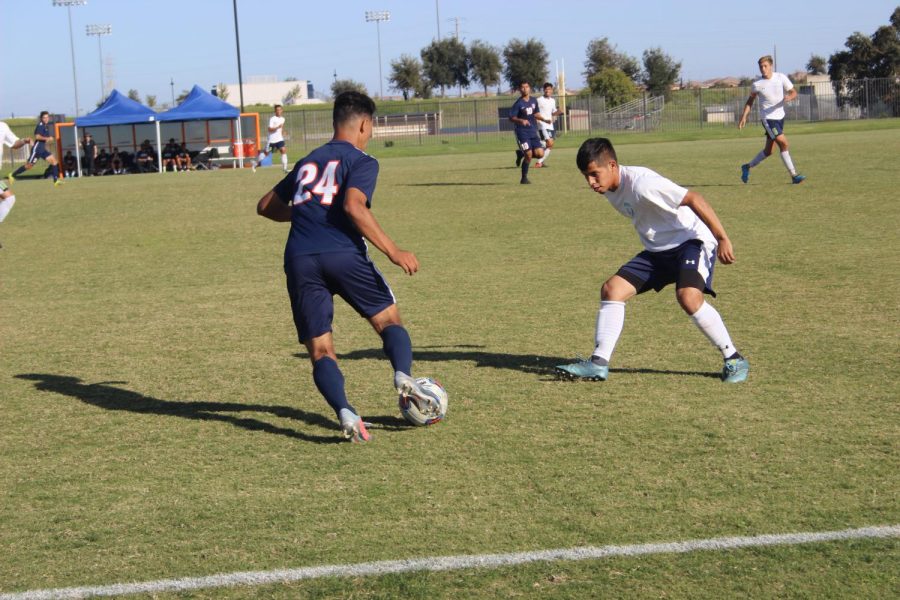 It was a battle to the end, literally, and throughout this game, three yellow cards and 14 fouls were called on the Hawks.

“This was our hardest working game we ever been through this season, and the inconsistent that the boys were preserving in the last moment really paid it off in the end,” said Assistant Coach Vaughn Boyce.

“I was impressed by the defense which generated our offense a lot, and that made everyone play smarter and shoot the winning shot,” said Boyce.

The Hawks controlled the possession of the ball in the first half, but could not score. They took advantage, shooting the ball 11 times, but Clovis’s defense kept them away.

“It was very frustrating to not score if we had the opportunity, but we never gave up,” said midfielder Efrain Serrano Jr. “What Coach [Ron Preble] encouraged us to do helped us to be more physical defensively and offensively.”

Goalkeeper Robert Sams did a tremendous job on defense, and there were opportunities that Clovis could’ve scored, but Sams prevented them from scoring.

By halftime it was a tie game 0-0, and the results from the first half was good defense and offense for the Hawks that kept Clovis from scoring, and clumsy mistakes from Clovis that turned into turnovers the Hawks took advantage for the time of the possession.

“We needed to make those shots count when we had the chance,” said Boyce.

As the second half began, Clovis tried to take control and take more shots to score a goal, but the Hawks didn’t step down and let Clovis have the momentum, so the Hawks outsmarted Clovis by passing the ball more and defending better.

An impressive play that the Hawks prevented Clovis from scoring was in the 16 minute. When Sams made the block and was on the ground, defense/forward Dylan Mello blocked the ball with his head and kicked the ball half field.

Clovis kept battling the Hawks, but the results for them ended up with three of their players injured, and one of them carted off the field. The player who was carted off had already injured himself before during the game, and wanted to keep on playing.

The final five minutes was intense; the Hawks and Clovis were giving their best to end this game, and no one wanted to go home a tie. Three minutes later, the two minute warning was up, and the Hawks created a drive to score the winning shot.

A throw in from defensive player Samuel Perez to forward/defense Ricardo Uribe shot the winning goal. It was a last minute strike that the Hawks made.

Clovis had their drive to score the goal, but time ran out and the Hawks held the lead and  won the game.

“The last five minutes was intense, and all that hard work really paid off from the assist from Perez,” said Uribe. “We kept our composure and worked together that helped us made that last minute goal.”