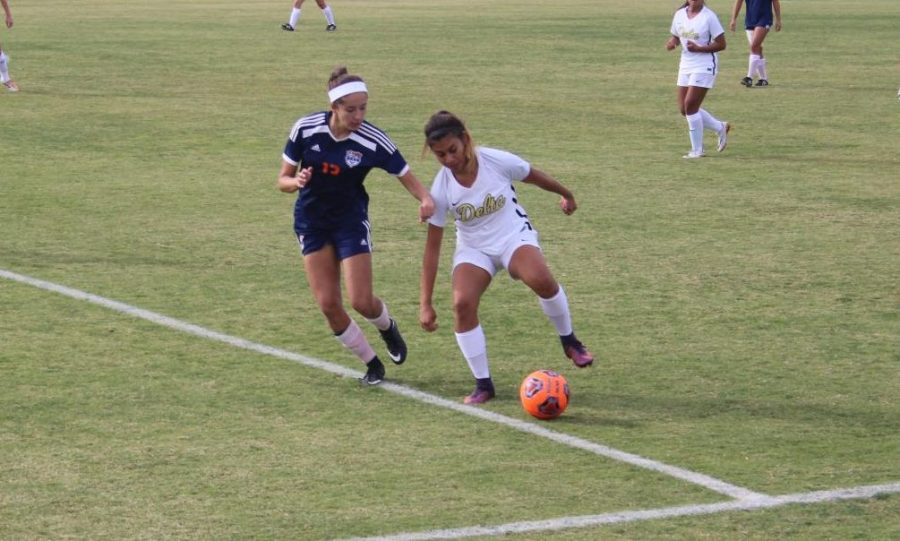 Hawks sophomore player Gabriella Bernard fights for the ball along the sidelines in the game against San Joaquin Delta on Friday.

The Hawks took a loss in Friday’s game against the San Joaquin Delta Mustangs 3-2.

The game took off to a fiery start. Both teams were playing aggressively. The Hawks showed great endurance and dexterity against the Mustangs throughout the game.

In the first half, Jessey Santos of the Hawks made a great play in an attempt to score against the Mustangs.

Also in the first half, Alex Torres of the Hawks, made an amazing kick scoring the first goal, setting the momentum of the game.

The game began to pick up speed in the first half, with Delta also making a goal, bringing the score to a tie.

Hawks player Taylor Thomas was a key player throughout the game. Thomas was key in assisting her teammates in several plays. Thomas made a great offensive play, running at full speed in an attempt to score another goal.

“I think I did all right,” said Thomas. “I mean it wasn’t my best game, but it wasn’t my worse, so I just have to keep pushing hard.”

Throughout the first half, it was a battle to take the lead. Delta scored again, taking the lead in the first half of the game 2-1.

The second half of the game started off slow but picked up speed as the game went on. Hawks goalkeeper Shelby Hand showed incredible blocking skills against Delta’s attempt to score again. She also encouraged her team from the goal, calling out “Put everything in!”

Towards the end of the second half, Delta scored again, taking the lead and ultimately winning the game 3-2.

“I felt we had a chance, the game proved we had a chance,” said Head Coach Cesar Plasencia. “It’s always a battle against Delta; unfortunately, we came up short, going into the next game, we have to take advantage of the opportunities we create.”

The players are looking forward to the next game against Folsom.

“As long as we can stay connected and keep our passes up and keep everything connected, we should be good,” said Hawks player Yvonne Taylor.