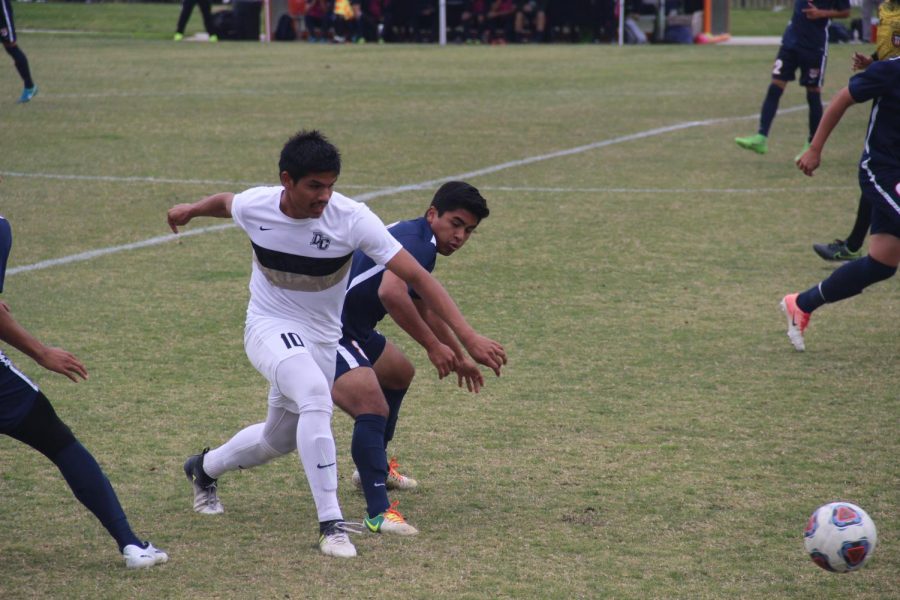 Freshman Midfielder Ivan Gutierrez blocks Delta from a potential scoring drive in the first half. The Hawks defense prevents the Mustangs from scoring a goal, resulting in a 0-0 first half.

The men’s soccer team went against the San Joaquin Delta Mustangs, and with two games left in the season, their run to get a playoff spot was on the line, but after 90 minutes they ended with a tie 1-1.

In their previous matchup, the Hawks fell to the Mustangs 2-0 at San Joaquin Delta College, so the Hawks were prepared to face the Mustangs again, and the energy was in the air for them.

“They’re a good team, and I think that’s the best Delta team I’ve seen since Coach Josh Bradley has been over there, and he has done a nice job on creating a good culture and soccer team,” Hawks Head Coach Ron Preble said.

The first half was a scoreless game after 45 minutes, but the Hawks were putting on the pressure and controlling the tempo of the ball.

Hawks Goalkeeper Robert Sams did a tremendous job on defense; there were opportunities that the Mustangs could’ve scored, but Sams prevented them from scoring.

It was a back-and-forth battle, and by halftime it was a tie game 0-0. The result from the first half was good defense and offense for the Hawks that kept the Mustangs from scoring.

There were chances that the Hawks could’ve scored, but Goalkeeper Dylan Bosnich for the Mustangs prevented the Hawks from scoring as well, so both teams had very good goalkeepers to keep the teams in the game.

“I’m proud of my teammates that they worked hard to the last minute, and we were hungry and went for the win, but we played well overall,” Sams said.

As the second half began, both teams came colliding at each other and tried to score first, and within five minutes, the Mustangs scored.

That fueled the Hawks to tie the game, and three minutes later, Forward Ivan Gutierrez created his own drive that beat four Mustang defenders and passed the goalie that tied the game.

Ivan Gutierrez said he felt really proud of his teammates and the encouragement that he was receiving. Gutierrez also said that the team needed the goal to get back into the game.

With 30 minutes left, the Hawks and Mustangs were both on the verge to take the lead and win the game. The Hawks were outshooting the Mustangs, yet could not score.

The Hawks were passing, sharing and communicating very well, but the clock was still going, and the Mustangs were making clumsy mistakes that the Hawks would take advantage of.

After 90 minutes, neither team could score. The Hawks still have the opportunity to get a playoff spot if they win these last two games.

“We fought back, and answered their goal, but even though being a little half-stepped off of the game, and I felt that we fought,” Preble said. “We needed to be a little calm in moments that requires skill and concentration.”